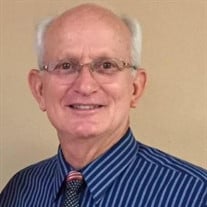 Andrew Warner Bedair, 71, of Lumberton, Texas passed away Thursday, September 17, 2020, at Memorial Hermann Memorial City Hospital in Houston. Andrew was born April 19, 1949 in Port Arthur, Texas to Auldon and Isabelle Bedair. He graduated from Port Neches Groves High School in 1969 and served in the United States Army from April 1969 to April 1971. He did a tour in Vietnam from 1970 ~ 1971, achieved E5 (Sergeant Rank) and was in the 82nd Airborne Division. Andrew later continued his education through the apprenticeship program with Pipefitters Local 195. Andrew retired as a welder/pipefitter in 2010. Andrew is preceded in death by his parents, Auldon Alston Bedair and Isabelle Clark Bedair; brother, Robert Alston Bedair. Those left behind to cherish his memory are his loving wife of 49 years, Nancy Smith Bedair; sons, Brett Andrew and his wife, Rebecca Yates Bedair; Jason Daniel Bedair and his wife, Erin Toney Bedair; five grandchildren, Jonah Bedair, Madison Bedair, Emily Bedair, Colson Bedair and Clayton Yates. Also survived by siblings, Wallace Bedair, Don Bedair, Sheryl Leatherwood, Nora VanHess and a host of nieces and nephews whom he cherished and dearly loved. Andrew was fondly remembered and considered the “Favorite Uncle” by many. Andrew possessed a deep abiding faith in Jesus Christ, having received the Holy Ghost at the age of 24 and continued to walk with God throughout his life. He had a “larger than life” personality and filled the room with laughter and joy wherever he went. He never met a stranger and had an impact on many lives throughout his service to the Lord. Andrew will be greatly missed by all of his family and a multitude of friends. In lieu of flowers donations may be made to the charity of your choice in memory of Andrew Warner Bedair. A gathering for friends and relatives will be held Monday, September 21, 2020 from 1:00 p.m. until 2:00 p.m., with the service to begin at 2:00 p.m., at Melancon’s Funeral Home, with Rev. Murry Ray officiating. Military honors will be provided by the Southeast Texas Veteran’s Service Group following the chapel service at Melancon’s Funeral Home. Due to Coronavirus-19 we request that friends and relatives practice social distancing while attending Andrew’s visitation and service. All guests are required to wear a face mask before entering Melancon’s Funeral Home. Due to limited seating, please allow all family members to be seated first.

The family of Andrew Warner Bedair created this Life Tributes page to make it easy to share your memories.