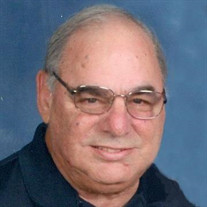 Anthony Joseph “AJ” Roccaforte, 76, of Port Neches, Texas passed away Saturday, May 7, 2022 at his home surrounded by his loving family. AJ was born on November 4, 1945 in Port Arthur, Texas to the late Salvador Sam Roccaforte and Marie Ann Arisco Roccaforte. AJ was a life-long resident of the Port Neches area and a parishioner of St. Elizabeth Catholic Church in Port Neches. He worked for Texaco as a Master Craftsman Machinist where he retired after 42 years of service. AJ enjoyed going to the YMCA in Port Arthur where he exercised and drank coffee with his friends. He loved sports, especially Notre Dame Football, the Green Bay Packers and the New York Yankees. Above all, AJ was a family man. He revolved his life around family and he never missed a birthday, game, or any life event that involved his children or grandchildren. AJ was a kind and compassionate person that would do anything for someone in need. He was a loving husband, father, grandfather, and soon to be great-grandfather whose kind and loving spirit will be missed by all that knew him. Those left to cherish AJ’s memory are his loving wife of 55 years, Paula Granger Roccaforte of Port Neches; daughter, Jennifer Roccaforte Garza of Port Neches; son, Jay Roccaforte and his wife, Tracy of Port Neches; daughter, Erin Ashworth and her husband, Brandon of Port Neches; grandchildren, Courtney Swanson, Carley Roccaforte Mayfield and her husband, Dail, Carson Roccaforte, Ethan Ashworth, Grant Garza, Connor Roccaforte, Allie Ashworth, Jake Ashworth; soon to be great-grandson, Baby Mayfield; brother, Charles Roccaforte and his wife, Lou of Port Neches; sister-in-law, Lynette Roccaforte of Port Neches; and numerous loving nieces, nephews, family members and friends. AJ is preceded in death by his parents and his brother, Sammy Roccaforte. A Christian Vigil to honor the Life of AJ Roccaforte will be held at St. Elizabeth Catholic Church in Port Neches, Texas on Wednesday, May 11, 2022 from 5:00 p.m. until 8:00 p.m. with a Rosary to be recited at 6:00 p.m. A Mass of Christian Burial will be held Thursday, May 12, 2022 at 10:30 a.m. at St. Elizabeth Catholic Church. Interment will follow at Oak Bluff Memorial Park in Port Neches, Texas.

Anthony Joseph &#8220;AJ&#8221; Roccaforte, 76, of Port Neches, Texas passed away Saturday, May 7, 2022 at his home surrounded by his loving family. AJ was born on November 4, 1945 in Port Arthur, Texas to the late Salvador Sam Roccaforte and... View Obituary & Service Information

The family of Anthony Joseph "AJ" Roccaforte created this Life Tributes page to make it easy to share your memories.