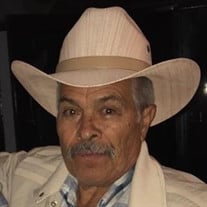 Arnoldo Becerra, 76, of Groves, Texas passed away May 29, 2019. He was born in Cotija, Mich., Mexico on October 24, 1942 to the late Adolfo Becerra and Esther Torres. He was a member of Our Lady of Guadalupe Catholic Church in Port Arthur.... View Obituary & Service Information

The family of Arnoldo Becerra created this Life Tributes page to make it easy to share your memories.