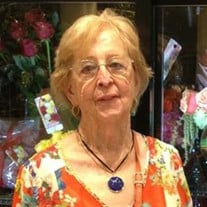 Barbara Ann Tingen, 84, of Nederland, Texas passed away on Friday, June 2, 2017 at Christus St. Elizabeth Hospital in Beaumont, Texas. Barbara was born in McKenney, VA. on August 24, 1932 to the late, Charles Lee Killebrew and Ladye E. Heartwell Killebrew. Barbara worked in the Tax and Automobile Department of the Jefferson County Tax Assessor-Collector's Office in Beaumont, Texas. Barbara was a caring, compassionate woman who cherished family and friends. She was a loving wife, mother, and friend. Barbara was proud of her children and especially her grandchildren who were the light of her life. She will be missed by all her family and friends. Barbara is survived by her son, Dale Tingen and wife, Janet of Kingwood, Texas; daughter Vickie Sauerwein and husband, Drew of Nederland; grandchildren, Stephen Tingen, Justin Tingen, Eric Sauerwein and Dr. Andrea Sauerwein; and a host of loving nieces and nephews. In addition to her parents, Barbara is preceded in death by her husband, Donald Tingen. A gathering of family and friends will be held on Monday evening, June 5, 2017 from 5:00 p.m. to 8:00 p.m. at Melancon’s Funeral Home in Nederland. The funeral service will be held at 10:00 a.m. on Tuesday, June 6, 2017 at Wesley United Methodist Church in Nederland with Pastor Douglas Caldwell, Officiant. Burial will follow at Memory Gardens of Jefferson County in Nederland. In lieu of flowers, the family has requested that donations be made in Barbara’s memory to the Wesley United Methodist Church United Methodist Women. P.O. Box 985 Nederland, Texas. 77627

The family of Barbara Ann Killebrew Tingen created this Life Tributes page to make it easy to share your memories.

Barbara Ann Tingen, 84, of Nederland, Texas passed away on Friday,...