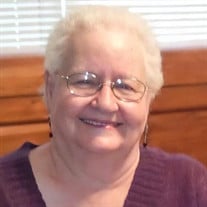 Betty Swanzy Smith, 81, of Port Neches, Texas passed away on Tuesday, February 16, 2021 in Port Arthur, Texas. Betty was born in Rosebud, Texas on June 27, 1939 to the late, Hilliard Swanzy and Helen McCollum Swanzy. Betty spent her life taking care of other’s needs before her own. She loved with everything she had in her. She was a wonderful Mother and an even better Mawmaw. Her life was a blessing, her memory is now a treasure, she is loved beyond words and will be missed beyond measure. She is forever our Guardian Angel. Those left to cherish her memory include her daughter, Jeanette Watts and her husband, Alfred Watts of Port Neches; her son, Jerry Smith and his significant other, Laura Sons of Vidor, Texas; brother, Billy Swanzy and his wife, Minnie; sister, Carolyn Hurt; grandchildren, Zachary Watts, Nicholas Watts, Bethany Smith, Kaitlyn Compton, Jerry Smith, Jr. and Wyndi Wright; great-grandchildren, Emma Odom, Beau Watts, Lilia Garcia, Kase Compton, Gracelyn Watts, Onyx Smith, Dawson Compton, Annaleigh Watts, Adley Watts, Krew Compton, Bayleigh Watts and Jensen Smith. In addition to her parents, Betty is preceded in death by her loving husband of 44 years, Alvin I. Smith; her brothers, Robert Swanzy, Ray Swanzy, Joe Dean Swanzy and her sister, Helendale Hyde. A gathering of family and friends will be held at Melancon’s Funeral Home in Nederland, Texas on Monday, February 22, 2021 from 5:00 p.m. until 8:00 p.m. Betty’s funeral service will be held at 2:00 p.m. on Tuesday, February 23, 2021 also at the funeral home with entombment to follow at Oak Bluff Memorial Park in Port Neches.

The family of Betty Swanzy Smith created this Life Tributes page to make it easy to share your memories.

Betty Swanzy Smith, 81, of Port Neches, Texas passed away on...