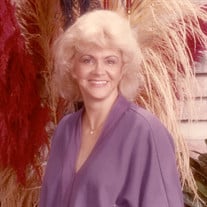 Beverly Melancon Salvagio, 87, of Nederland, went to be with the Lord on Wednesday, June 27, 2018 after being in the care of the amazing medical staff at Methodist Hospital in Houston, Mid Jefferson Extended Care Hospital, Bonne Vie Nursing home and Altus Hospice Care at Medical Center of Southeast Texas. Her last days were filled with singing, laughter, crying, praying and feeling the love of her treasured family and dear friends. She was born on October 24, 1930 in Port Arthur, Texas. She was preceded in death by her father Moise Melancon, her mother, Melia Broussard Melancon, and her sister Lorraine Comeaux. She is survived by her 11 children and their spouses: Joseph (Joey) and Gloria Salvagio, Alida (Liddy)and Terry Melancon, Julie Salvagio, Paula Thompson, Michelle and Hollis Whorton, Keely and Dewayne Ritchey, VinceAnn and Bobby Taylor, James (Jimmy) and Fay Salvagio, Mozelle and Rickey Cobb, Gina and Paul Gutierez, and John and Juli Salvagio; 26 grandchildren and their spouses: Joey Salvagio, Nicholas and Cassandra Salvagio, Leah Salvagio and Jesse Miller, Tony and Angela Salvagio, Cindy and Scott Wedekind, Jerrod Wagoner, Elizabeth and Savino Menchaca, Terry and Blaire Melancon, Brian and Michelle Melancon, Travis and Kristin Thompson, Tyler Thompson, Trent Thompson, Jamie and Tom Cochill, Michael Melancon and Kayla Landry, Joli and Karl Huckaby, Daryn and Cassie Ritchey, Ethan and Brittany Taylor, Sam Salvagio, Luke Salvagio, Matthew Cobb, Andrew Cobb, Samuel Gutierez, Gabrielle Gutierez, Jake Salvagio, Joel Salvagio and Julia Salvagio; 24 great grandchildren: Kiersten Salvagio, Nicholas Salvagio, Franco Salvagio, Verona Salvagio, Grayson Miller and one on the way, Cassidy Wedekind, Chloe Wedekind, Emma Simons, Ethan Torres, Zoe Wagner, Cierra Kirkguard, Taylor Melancon, Tori Melancon, Jacob Melancon, Brazos Thompson, Katelynn Bryant, Knox Melancon and one on the way, Trinity Huckaby, Bryce Huckaby, Davis Ritchey, Chandler Ritchey and Charlie Ritchey, Shandalynn Lee Taylor. She was a strong woman and had an even stronger zest for life. Everything she did was done with passion and a commitment to see it through. She loved singing and taught all of her children to sing in harmony. That was how she kept all of us kids from driving her crazy in the car. She took us everywhere; and always told us that she was not lost so if we didn't want to be lost, follow her. We had the greatest adventures with her. When we asked where are we going, she would always say " London to see the Queen". Needless to say, we have yet to see the Queen. All that really mattered was that we were going on an adventure together. Not only was she a great mom to us, she was a wonderful second mother to all of our friends. She was loved deeply by everyone that knew her. She never met a stranger, and literally would acknowledge and kiss on any baby that she saw. She loved so genuinely and sincerely. She was the happiest any time she was with her family. She will be greatly missed here, but I'm certain that she is stirring it up in heaven and definitely is singing the loudest in the heavenly choir. By living the life she raised us to live, we honor her and will carry her with us every step of the way. We love you for all eternity momma! Her life will be celebrated at a Memorial Service on Saturday, June 30th at St. Charles Catholic Church in Nederland. A gathering of family and friends will begin at 10:00 am followed by a Mass at 11:00. All are welcome to join a reception in the church hall following the Mass.

Beverly Melancon Salvagio, 87, of Nederland, went to be with the Lord on Wednesday, June 27, 2018 after being in the care of the amazing medical staff at Methodist Hospital in Houston, Mid Jefferson Extended Care Hospital, Bonne Vie Nursing... View Obituary & Service Information

The family of Beverly Melancon Salvagio created this Life Tributes page to make it easy to share your memories.

Beverly Melancon Salvagio, 87, of Nederland, went to be with...