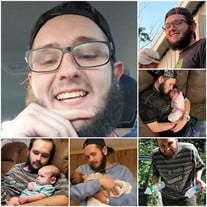 Bryce David Potter, 22, of Bridge City, Texas passed away Thursday, August 5, 2021. Bryce was born July 16, 1999, in Beaumont, Texas to Stanley Allen Potter and Jeanine Ann Quebodeaux Potter. Bryce was a pizza maker for Pizza Hut in Bridge City. The love of his life was his daughter, Ellie. Bryce had a beautiful soul and was a light in many lives. He was protective of his family and to those he loved. Bryce was intelligent in many aspects and extremely knowledgeable when it came to firearms. He took care of his family and was always willing to help those in need. At the young age of 12, Bryce was recognized for saving a life. Bryce had a huge imagination and enjoyed making people laugh. His smile and kindness will be greatly missed by all that knew him. Bryce is preceded in death by his beloved grandparents, Sandra Quine, Edward Quebodeaux Sr., Carol Sue Dexter, and Willard Allen Potter. Those left behind to cherish Bryce’s memory are his mother, Jeanine Potter; father, Stanley Potter; brother, Nicholas Potter; sister, Justice Guidroz; daughter, Elliott Lynn Potter; uncles, Edward Quebodeaux Jr. and his wife, Heather; David Carpenter and his wife, Melissa; aunts, Amber Piper and her husband, John; Therese Field and her husband, David; Vickie Abel and her husband, Chris. Bryce is also survived by a host of aunts, uncles, cousins, nieces, and a nephew. Services are postponed until a later date.

The family of Bryce David Potter created this Life Tributes page to make it easy to share your memories.