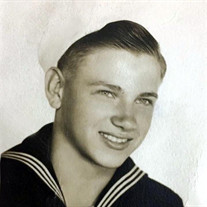 Carl W. “Bill” Wagner, 90, of Port Arthur, passed away on Tuesday, April 5, 2017 in Port Arthur at the Medical Center of Southeast Texas. Carl was born in Port Arthur to the late August Henry Wagner and Ella Winche Wagner on August 26, 1926. Carl was the owner of Wagner Air Conditioning for over 50 years, a member of First Baptist Church, Port Arthur, he served his country in the United States Navy from 1942 – 1946, he was retired with 35 years of service at the Texaco Refinery in Port Arthur and he was a member of the Groves Masonic Lodge #1315. Carl is survived by his loving wife of 67 years, Doris Wagner of Port Arthur; son, Carl Wagner, Jr. and wife, Tavia of Bridge City; daughter, Sheila Jones and husband, Jeffrey of Groves; grandsons, Danny Paris, Jeffrey Paris and Robert Howe, IV; granddaughters, Kristi Courtney, Roxanne Alexander, Renee Wagner and Nicole Howe; and a host of loving nieces and nephews. Carl is preceded in death by his parents and his daughter, Linda Gail Paris. A gathering of family and friends will be held at Melancon’s Funeral Home in Nederland on Friday, April 7, 2017 from 5:00 p.m. – 8:00 p.m. The funeral service will be at 2:00 p.m. on Saturday, April 8, 2017, also at the Funeral Home. Burial will follow at Greenlawn Memorial Park in Groves.

The family of Carl W. "Bill" Wagner created this Life Tributes page to make it easy to share your memories.