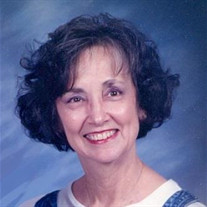 Carolynn Plummer Willson, 79, of LaBelle, passed away peacefully on Monday, July 15, 2019, surrounded by family. She was born April 3, 1940 in Beaumont, to Agnes Foley Plummer and Wesley Frances Plummer Sr. She was a graduate of Saint Anne Catholic School, Saint Anthony High School, University of Dallas, and the University of North Texas. Carolynn was a veteran school teacher. She taught for 28 years in Nederland ISD. She was a dedicated and involved member of Saint Mary Church in Fannett. Carolynn was an avid bridge player with her husband Frank. They were members of several bridge groups and enjoyed playing with them. She was a member of ADK teacher sorority. She enjoyed gardening and home interior decorating. Her greatest joy in life was playing with her grandkids. Carolynn is survived by her husband, Frank Willson of LaBelle; her sister, Frances Crozier; her daughter Kate Dessommes and her son Dylan Marino of Portland; her daughter Alison Dessommes Spaulding of LaBelle; Her daughter Marianna Byrnes and husband (David Byrnes) and their children Kyle Byrnes, Brian Byrnes, Katheryn McDaniel, Kyle McDaniel, and Madelyn Byrnes of Beaumont. She is also survived by her step son Frank Dale Wilson Jr. and his children Lauren Broussard, Morgan Willson, Dylan Willson, and his grandson Hudson Broussard of Beaumont; her step daughter Sandy Bintliff and her husband (Joel) their kids Dustin Sonnenberg and Haley Bintliff of Katy; and her step-daughter Pamela Glass and her husband (Rich) their sons Heath Strubel, Hayden Sybert, and Kohl Sybert of League City. In addition to her parents, she is preceded in death by her sister and brother, Beverley Anne Plummer, Wesley Frances Plummer Jr., and Patrick Plummer. She will be missed and always remembered. A gathering of family and friends will be held on Friday, July 19, 2019 at Melancon’s Funeral Home from 1:00 p.m. until 2:00 p.m. Memorial services will follow at 2:00 p.m.

Carolynn Plummer Willson, 79, of LaBelle, passed away peacefully on Monday, July 15, 2019, surrounded by family. She was born April 3, 1940 in Beaumont, to Agnes Foley Plummer and Wesley Frances Plummer Sr. She was a graduate of Saint Anne... View Obituary & Service Information

The family of Carolynn Plummer Willson created this Life Tributes page to make it easy to share your memories.