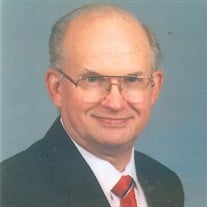 Charles Samuel “Sam” Steele 1940 ~ 2018 Sam Steele, formally of Nederland, Texas and most recently from LaBelle, Texas and Whitehouse, Texas… passed away at Hospice of East Texas in Tyler, Texas on October 2, 2018 at the age of 77 years. He was born on November 19, 1940 in Abilene, Texas to Lee Edward Steele and Edith Clara Wright Steele. After graduating from Abilene High School with the class of 1959, he attended Arlington State University in Arlington, Texas from 1959-1960. Sam married Sidney Louise Starr Steele (AHS class of 1961) on August 4, 1961 in Abilene, Texas. He next graduated from Hardin-Simmons University in Abilene, Texas in 1963 with a B.S. degree in Chemistry and Physics. He was awarded a Fellowship in chemistry to Oklahoma State University in Stillwater, Oklahoma from 1963-1964. As a Member of the ROTC program with the University, Sam entered the Army to serve his two year Active Duty Tour at the Aberdeen Proving Grounds Post in Aberdeen, Maryland. Then ending his Tour of Duty at Fort Sill Army Post, Oklahoma as a First Lieutenant with the Army Ordinance Corp. On June 11, 1965, his only daughter, Stacye Ann Steele was born at Fort Sill, Oklahoma. Sam began his career as a Chemist for Jefferson Chemical Company located in Port Neches, Texas in 1965. Jefferson Chemical Company was sold to Texaco Chemical Company and Sam continued as a Chemist with Texaco. A son, his pride and joy, Scott Samuel Steele was born on February 18, 1971 in Nederland, TX. At this time, Sam graduated with a Masters Degree in Chemistry from Lamar University in Beaumont, TX. After 36 years, Sam retired from Huntsman Petro Chemical Company, formerly Texaco Chemical Company, as superintendent of laboratories with six U. S. Patents in his name. Upon retirement, Sam built the Family’s dream home in LaBelle, TX in the Beaumont area. Next, a second home was built in Whitehouse, TX in the Tyler, TX area. He fought a long 16 year battle with Parkinson’s Disease. Sam was preceded in death by his Parents, and older brother, Harral Steele of Abilene, TX and recently, his daughter, Stacye Ann Steele of Nederland, TX, with Brain Cancer. He is survived by his wife of 57 years, Sidney Starr Steele of LaBelle, TX and Whitehouse, TX; his son, Scott and daughter-in-law, Tania Mauboules Steele of LaBelle, TX; his sister, Margaret Steele Higgs of Whitehouse, TX; his sister-in-law, Theresa Major Steele of Abilene, TX; a niece, Nancy Higgs Gibson of Whitehouse, TX; and nephews, David Steele of Stephenville, TX, Don Steele of Lubbock, TX, and Darral Steele of Abilene, TX; a special life long friend, James McClure of Tyler, TX; and last but not least, Sam’s four beloved rescued Grand Dogs, Jake, Foster, Zoli, and Tucker. After cremation, Sam was laid to rest with a Private Graveside Service at Memory Gardens Cemetery in Nederland, Texas.

The family of Charles Samuel "Sam" Steele created this Life Tributes page to make it easy to share your memories.