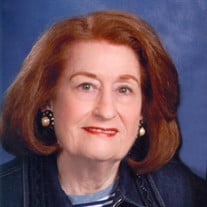 Coleta Faye West Suiter, 88, of Port Neches, Texas, passed away, surrounded by family, on Sunday afternoon, February 27, 2022. She was born in Sallisaw, Oklahoma on April 28, 1933 and attended Central High School. In 1953, she received an Associate’s Degree from Connors State A&M College, then moved to Wichita, Kansas and worked for Southwestern Bell Telephone Company. In 1960, she married her beloved “Honeybun”, Kenneth McClain Suiter. They lived in El Dorado, Kansas, with their two daughters, until the family moved to Port Neches, Texas in 1973. Soon after, Coleta continued her education at Lamar University in Beaumont where she received a Bachelor of Science (1976) and a Master of Science (1980) in Home Economics. Coleta was an instructor at Lamar University for many years and taught several classes in fashion merchandising, design, and construction. Coleta was a member of The First United Methodist Church in Port Neches. She served on various committees and enjoyed the fellowship of her Joy of Living Bible Studies group. She was preceded in death by her husband, Kenneth McClain Suiter; parents, Lula Bell (Foutch) and Marion Lewis West; brothers Warren, Tom, Paul, Roy, Judge, Dick, Nolan, and Sanford; sisters Fannie, Irene, and Nina. Those left to cherish Coleta’s memory include her daughter, Elizabeth Anne Suiter and husband, Robert Emanuel, of Port Neches; daughter, Martha Kay Suiter of Galveston; granddaughter, Julia Renee Emanuel, an Aggie at Texas A&M University, College Station; brother, Carl West and his wife, Roberta; extended family, treasured neighbors, and dear friends. A gathering of family and friends will be held at Melancon’s Funeral Home in Nederland, Texas on Friday, March 4, 2022 from 10:00 a.m. until 11:00 a.m. with the funeral service to begin at 11:00 a.m. Interment will follow at Oak Bluff Memorial Park in Port Neches, Texas. The family would like to express their thanks to the caring personnel at Bonne Vie and Amedisys Hospice. Memorial contributions may be made to the Southeast Texas Food Bank or the Effie and Wilton Hebert Public Library in Port Neches.

Coleta Faye West Suiter, 88, of Port Neches, Texas, passed away, surrounded by family, on Sunday afternoon, February 27, 2022. She was born in Sallisaw, Oklahoma on April 28, 1933 and attended Central High School. In 1953, she received an Associate&#8217;s... View Obituary & Service Information

The family of Coleta Faye Suiter created this Life Tributes page to make it easy to share your memories.