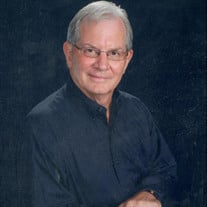 Daniel Wayne Delahoussaye, 73, of Nederland, beheld the face of the One who saved him on Thursday, February 4, 2021. He was born July 30, 1947, in Beaumont to the late James Daniel Delahoussaye and Margueriete Slayton Delahoussaye. Danny was a lifelong resident of Nederland. He graduated from Nederland High School in 1965 and attended Lamar Institute of Technology. Danny served 2 years in the United States Army, devoting himself to his country through a tour in Germany. He worked 13 years at Texaco Refinery and 30 years at ExxonMobil, where he formed many special bonds with co-workers that carried on through retirement. Danny enjoyed charity sporting clays, fishing and hunting. But what he was best known for was his Christ-like love. Whether treating someone to Starbucks, playing with his nieces and nephews, offering a big warm hug, or countless other acts of service, Danny lived and loved in a way that pointed other to Jesus. To Danny, family was not a statement of relationship; it was a matter of the heart, and his heart was overflowing. Danny is survived by his childhood sweetheart and soul mate, Earlyne Glaze Delahoussaye, his wife of 49 years with whom he shared his heart and a beautiful life. He is also survived by his sister, Sharon Delahoussaye, as well as 16 nieces and nephews, 19 great nieces and nephews and a host of friends who he loved like family. He is preceded in death by his parents and brother, Charles Richard Delahoussaye. An outdoor graveside service will be held at 2:30 p.m., Tuesday, February 9, 2021, at Oak Bluff Memorial Park in Port Neches. Military honors will be provided by the Southeast Texas Veteran’s Service Group. Serving as pallbearers are Lance Howell, Jared Deupree, Travis Tallant, Josh Tallant, Ryan Thibodeaux, and Larry Howard. Serving as honorary pallbearers are Andrew Howell, Frankie Domino and Titus Tallant. The family has requested in lieu of flowers that memorial contributions be made to Promised Ministries, PO Box 511, Nederland, or LIT Shoot-Out Scholarship Endowment, PO Box 10085, Beaumont. Heartache is shadowed by hope because we know that Daniel Wayne Delahoussaye heard his father say, “Well done good and faithful servant,” and oh what a glorious day for him that was!

Daniel Wayne Delahoussaye, 73, of Nederland, beheld the face of the One who saved him on Thursday, February 4, 2021. He was born July 30, 1947, in Beaumont to the late James Daniel Delahoussaye and Margueriete Slayton Delahoussaye. Danny was... View Obituary & Service Information

The family of Daniel "Danny" Wayne Delahoussaye created this Life Tributes page to make it easy to share your memories.