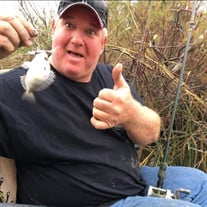 Daniel “Boog” Frederick, 53, of Groves, Texas passed away on Saturday, July 17, 2021 in Port Arthur, Texas. Daniel was born in Port Arthur on July 22, 1967 to Daniel and Kathrine Frederick. Daniel loved spending time with his wife and family. His grandchildren were his world. He enjoyed being at the lake, fishing, competing in fishing tournaments with Michael and Scott and being at the beach. Those left to cherish his memory include his loving wife of 35 years, Shelly Frederick of Groves, Texas; mother, Louise Frederick of Groves; son, Christopher Sellers of Groves; daughters, Erica Lee and her husband, Michael of Bridge City, Texas and LeighAnn Alvarez and her husband, Tomás of Bridge City; sisters, Kim Ducote and her husband Kevin of Jasper, Texas and Cindy Brister and her husband, Warren of Groves; grandchildren, Miguel, Sean, Lupe, Aubree, Daniel and Israel; and a host of loving nieces and nephews. Daniel is preceded in death by his father, Daniel Francis Frederick. A gathering to celebrate Daniel’s life will be held at Melancon’s Funeral Home on Saturday, July 31, 2021 from 2:00p.m. until 4:00p.m.

The family of Daniel "Boog" Frederick created this Life Tributes page to make it easy to share your memories.