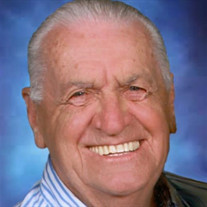 David Lee Arnaud, 81, of Nederland, Texas passed away Monday, June 21, 2021. David was born December 14, 1939, in Orange, Texas to James and Juanita Arnaud. David retired from DuPont after 40 years of service. After retirement, David used to play golf every chance he could. David had a larger-than-life personality and was a people person. When he walked into a room you knew David was present. David was most passionate about taking care of his wife and proud of his family. David was a sports fanatic and enjoyed playing poker and visiting the casino every Wednesday. David loved to play and watch anything where a ball was involved! In his younger days he played baseball and bowled for a DuPont league and played fast pitch softball on the Lighthouse championship team. David is preceded in death by his parents, James W. Arnaud and Juanita Wolfford Arnaud; sister, Judy Schoolfield; brothers, Randy Arnaud and Keith Arnaud. Those left behind to cherish David’s memory are his wife, Kay Arnaud; children, Cheryl Weaver and her husband, Brent; Davy Arnaud and his wife, Stephanie and stepson, Chris Wyble and his wife, Brenda; grandchildren, Kade Weaver and his wife, Lyndsey; Karlee Richards and her husband, Dylan; Peyton Arnaud, Brody Arnaud, Raegan Wyble, Jessica Riu and her husband, Caleb; and Amber Maass; great-grandchildren, Whitley Weaver, Atticus Riu and June Riu. In lieu of flowers memorial contributions in honor of David Lee Arnaud may be made to the charity of your choice. A visitation will be held from 9:00 a.m. until 10:30 a.m., Saturday, June 26, 2021, at Melancon’s Funeral Home in Nederland. A graveside service will follow at 11:00 a.m., at Evergreen Cemetery, 408 Border St., Orange, Texas 77630.

The family of David Lee Arnaud created this Life Tributes page to make it easy to share your memories.