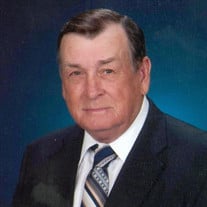 DC West was born on August 9, 1932 in Wiergate, Texas to Cecil Jacobs West and Dain Orvalee West. He died on March 21, 2020 in Port Arthur, Texas. DC attended Beaumont High School, graduated from Nederland High School, and attended Lamar Tech. Upon graduation from high school, he went to work at the Port Arthur Texaco Refinery, then served in the US Army in Japan. Upon return to the states, he met and married the love of his life, Patricia Ann Gypins. DC loved to fish, hunt, play golf, sing and spend time with his family. He was a former member of the Beaumont Bass Club and enjoyed living on Toledo Bend Lake for 25 Years. He was a member of Central Baptist Church Port Neches. He had a beautiful voice. He began his love for singing at the Kiddie Organ Club at The Beaumont Jefferson Theatre and later enjoyed singing his favorite praise and worship songs in church. DC enjoyed teasing and joking with his family. He loved a good laugh, and he made us laugh. We are so proud that we will be able to remember him for his willingness to put himself in harm’s way in order to save the lives of two burning men in a boat accident. He was a “tough old bird with a heart of gold”. He was preceded in death by his parents, his sister, Betty West Antilley, a brother, Glenn West, and a son, Russell Lee West. DC is survived by his wife of 65 years, Patricia, a son, Brett West, a daughter, Lynda West Lindsey, seven grandchildren, Alyssa West Janness, Morgan West, Patricia West, Jon Lindsey, David Lindsey, Daniel Lindsey, Stephen Lindsey, and eight great-grandchildren. Due to COVID-19 the family will be having a private service on Tuesday, March 24, 2020.

The family of DC West created this Life Tributes page to make it easy to share your memories.