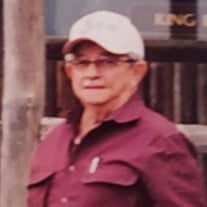 Delton “Tee” J. Terro, 89, of LaBelle passed away Friday, June 18, 2021. He was born on May 13, 1932 in Indian Bayou, Louisiana to the late Clomart Terro and Teresa Trouve. Delton was a faithful member of St. Mary’s Catholic Church in Fannett, and more recently Little Flower Catholic Church in Port Arthur. He was also a member of the Knights of Columbus - 3195 St. Christopher Council of Port Arthur. He began working in multiple fields of construction from a young age until he went on to become a barber. He was extremely well known for his work as a barber, and customers would even come from Louisiana to get their hair cut by him. He would always make you smile, and he had a nickname for everyone. Delton was a loving husband, father and grandfather. He was faithful to his church and family and he will truly be missed. Those left behind to cherish Delton’s memory are his loving wife of 64 years, Margaret Hunt Terro; his children, Rodney Terro and his wife Deana, Sherry Van Pelt, Delton P. Terro, and Sandra Hollier and her husband Clint; his grandchildren, Nathan Terro, Dustin Terro, Keisha Williams, Bryan Thibodeaux, Jody Hollier, Kyli Clark, Travis Van Pelt, and William Van Pelt; his numerous great-granchildren; and his brothers, Weldon Terro, Marty Terro, and Nick Terro. He is preceded in death by his parents, two brothers and one sister. A gathering of family and friends will be held Tuesday, June 22, 2021, from 5:00 p.m. until 6:30 p.m. at Melancon’s Funeral Home in Nederland, with a Rosary to be recited at 6:30 p.m. A Mass of Christian Burial will be held at Little Flower Catholic Church in Port Arthur on Wednesday, June 23, 2021 at 10:00 a.m. with Father Rejimon E. George celebrant.

The family of Delton "Tee" J. Terro created this Life Tributes page to make it easy to share your memories.