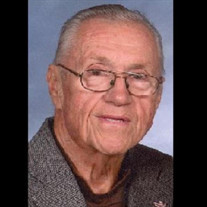 Donald Justin Plokhooy, Sr. 91 of Port Neches, Texas passed away on Tuesday, May 11, 2021 in Port Arthur, Texas. Donald was born on September 2, 1929 in Passaic, New Jersey to the late, Henry Plokhooy and Anne Cahayle Plokhooy. Donald served his country in the United States Navy during the Korean War which lasted from June 25, 1950 until July 27, 1953. Donald retired from Ameripol Synpol in Port Neches with over 40 years of service. Those left to cherish Donald’s memory include his sons, Donald Justin Plokhooy, Jr. and his wife, Diana of Waxahachie, Texas, Craig Edward Plokhooy and his wife, Connie of Groves, Texas; his daughter, Justine Ann White and her husband, Ralph of Goodrich, Texas; three grandchildren and six great-grandchildren. Donald is preceded in death by his parents, Henry Plokhooy and Anne Cahayle Plokhooy; his loving wife of 63 years, Frances Elaine Pinkosh; his brother, Robert Plokhooy; and his grandson, Russell White. A gathering of family and friends will be held on Friday, May 14, 2021 at Melancon’s Funeral Home in Nederland from 12:00 p.m. until 2:00 p.m. with the funeral service to begin at 2:00 p.m. Pastor Jason Richards will officiate the service. Burial will follow at Oak Bluff Memorial Park in Port Neches, Texas.

The family of Donald Justin Plokhooy, Sr. created this Life Tributes page to make it easy to share your memories.