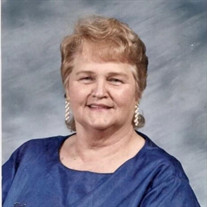 Earline Miller, 84, of Port Neches, Texas passed away Tuesday, November 30, 2021. She was born in Beaumont, Texas on August 15, 1937 and was a lifelong resident of the area. Earline was a member of the Vidor High School graduating class of 1955. Growing up, she was known for her athletic ability and enjoyed playing sports. After graduating high school and attending college, she stayed actively involved in her community. She played a significant role in the Port Neches-Groves ISD PTA for over twenty years and was a substitute teacher. Earline was a very talented individual that had multiple careers that she excelled in throughout her life, and she was best known as an exceptional florist. She was the owner of Miller’s Flower Pot and was in the floral business for over 30 years. Earline never met a stranger. She had a very strong presence and knew how to light up a room. One of the most important things in life to Earline was her family. She was a loving wife, mother, grandmother, and great-grandmother. Earline will be missed by all who knew her. Those left behind to cherish Earline’s memory are her children, Danny Miller, Sr. and wife, Beverly, Buck Miller and wife, Kayla, Bruce Miller, Shaun Miller and wife, Melanie, Toni Robertson and husband, Eddie; grandchildren, Danny Miller II, Miranda Prosperie, Theresa Miller, Megan Smith, Nick Robertson, Lauren Buntyn, Abby Youngblood, Jessie O’Neill, Cassidy Miller, Kirby Miller; twelve great-grandchildren; brother, Pat Harper; and numerous loving nieces, nephews and family members. Earline is preceded in death by her parents, Raymond P. Bailey and Erla Ellis Bailey; birth mother, Olga Mae Bailey Harper; husband, Dan C. Miller; and brother, Will Harper, Sr., Walter Harper, and Leonard “Butch” Harper. A gathering of family and friends will take place at Melancon’s Funeral Home in Nederland, Texas on Friday December 3, 2021 from 6:00 p.m. until 8:00 p.m. A funeral service for Earline will be held Saturday, December 4, 2021 at Melancon’s Funeral Home and will begin at 2:00 p.m. Interment will follow at Oak Bluff Memorial Park in Port Neches, Texas.

Earline Miller, 84, of Port Neches, Texas passed away Tuesday, November 30, 2021. She was born in Beaumont, Texas on August 15, 1937 and was a lifelong resident of the area. Earline was a member of the Vidor High School graduating class of... View Obituary & Service Information

The family of Earline Miller created this Life Tributes page to make it easy to share your memories.