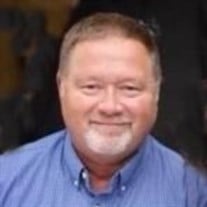 Eddie Noel Hall Jr., 61, of Beaumont, Texas passed away on March 3, 2021. He was born in Beaumont, Texas on November 11, 1959 to Eddie Noel Hall, Sr. and Dorthy Stanfield Hall. Eddie proudly served his country in the U. S. Navy. Eddie was an operations supervisor for Republic Services. He loved his job and the people he worked with. He was a member of Westgate Church of Christ and the YMBL in Beaumont. During his time in the YMBL he served on numerous committees, including the board of trustees. He served as the Caldwood Area Neighborhood Association president and spent several years volunteering with the Beaumont Police Department’s Citizen’s on Patrol Organization. He also spent numerous years as a Cub Scout Leader and coached baseball at Amelia Little League in Beaumont. Eddie throughly enjoyed giving back and serving the community. In his spare time, he enjoyed spending time with family, watching his beloved Texas Longhorns, and hanging out with his pups; Stella, Angus, and Brutus. Those left to cherish Eddie’s memory are his wife of 30 years, Kerry Lynn Hebert Hall of Beaumont; his sons, Dylan Hall and fiancé, Sienna Paul of Seabrook and Derek Hall of Port Neches; his father, Eddie Noel Hall, Sr. of Beaumont; and his sister, Tammy Hall of Houston. He is preceded in death by his mother, Dorthy Hall. A gathering of family and friends will be held on Tuesday, March 16, 2021 from 5:00 p.m. to 7:00p.m. at Melancon’s Funeral Home in Nederland. An additional visitation will be held at Westgate Church of Christ in Beaumont from 12:00 p.m. to 2:00 p.m. on Wednesday, March 17, 2021 with a funeral service being held at 2:00 p.m. Interment will follow at Forest Lawn Memorial Park in Beaumont.

The family of Eddie Noel Hall Jr. created this Life Tributes page to make it easy to share your memories.