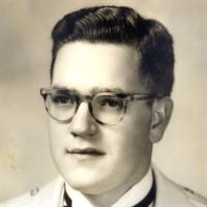 Edward Madison “Ned” Whitlock, Jr., passed away on April 7, 2017 in Houston, Texas, after a long illness. Those left to cherish his memory are his daughter, Janice L. Brown and her husband, Sid; son, Edward Madison Whitlock, III; brother, James L. Whitlock; grandson, Kyle Brown; niece Ann Leigh Whitlock; nephew, William F. Whitlock and his longtime and dedicated friend Everett "Meatball" Irby and caregiver Cheryl Reese. Edward is preceded in death by his parents, Edward Madison Whitlock and Mattie Leigh Whitlock and his wife, Lucie Jane Allis Whitlock. He grew up in Farmville, Virginia and was a member of the 1950 undefeated Farmville High School football team. He loved to spend time hunting, fishing, boating and traveling. “Ned”, as he was commonly known, graduated from Farmville High School in 1951 and then attended Virginia Military Institute and was awarded his degree in Civil Engineering in 1955. After graduating from the Virginia Military Institute, he served his country in the United States Army during the Korean Conflict for two years as a 2nd Lieutenant. After his time in the United States Army, he worked as a Traffic Engineer for Wilbur Smith Associates, which is a worldwide traffic engineering firm and retired from that firm as the Senior Vice President with 30 years of service. Edward was a licensed professional engineer in South Carolina as well as many other states and foreign countries. He was a member of the Board of Consultants of the Eno Foundation for Transportation. After his retirement from Wilbur Smith Associates, he owned and operated a Maaco Paint Shop for seven years in Columbia, South Carolina. Those that knew him best believe him to be one of the most thoughtful and kindest souls that one could ever ask to meet. A memorial service celebrating “Ned’s” life will be held at 10:00 a.m. on Saturday, April 22, 2017 at Melancon’s Funeral Home in Nederland, Texas. Also, a graveside service will be held at 3:00 p.m. on Saturday, May 20, 2017 in his hometown of Farmville, VA at Westview Cemetery. In lieu of flowers, the family ask that donations be made in Edward's memory to a charity of your choice.

The family of Edward "Ned" Madison Whitlock, Jr. created this Life Tributes page to make it easy to share your memories.