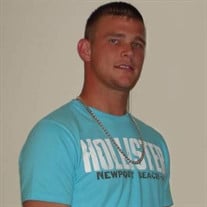 Erik Brandon Perry, 38, of Nederland, Texas passed away Wednesday, August 18, 2021. Erik was born March 15, 1983 in Orange, Texas to Selene Perry and Shawn O’Dell. Erik was a very hard worker, for the last year he has been maintaining state parks in the Houston area and really enjoyed making a difference in the beautification of the parks. He was gifted with a natural intelligence and many talents, one being an amazing artist. He also could work on just about anything and run any kind of equipment. Being a lifetime lover of nature and animals, in his spare time he enjoyed fishing with friends and listening to rap music. Erik did not have any children of his own but was the greatest “Uncle E” to his niece Aubrei and nephew Colton as well as an extended Uncle E to a host of family and friend’s children, they all adored him. His philosophy on life was that he never met people by chance, that there was always a reason and always a ‘lesson in the blessin’. He loved his family with everything he had… even though he had a shyness about him, he still loved being the center of attention to make people laugh. His silly, sweet and caring personality will resonate with family and friends for a lifetime and he will be missed tremendously by many. He was preceded in death by his favorite fishing buddy, his PawPaw, Sam W. Perry; and Grandfathers, Joe O’Dell, Gene Cathey and William Payne. Those left behind to cherish Erik’s memory are his mother and step-father, Selene and Darren Payne; father and step-mother, Shawn and Tina O’Dell; sister, Meagan Musick and husband, Josh; brother, Dustin O’Dell and wife Ashlee; nieces, Aubrei Kondos & Lila O’Dell; nephews, Colton Musick, Jaxon & Jorden O’Dell; grandparents, Jane and Floyd Hammock; Ladawn Cathey and Windell Griffin, Grandmother Anna Payne; aunts and uncles Teresa and John Sartor; Rebel and Dennis LeBlanc; Jan and Bill Payne: Sallie and Rick Workman, and a host of other aunts, uncles, cousins and friends. Erik’s wishes were to be cremated. The family will have a private memorial at a later date.

Erik Brandon Perry, 38, of Nederland, Texas passed away Wednesday, August 18, 2021. Erik was born March 15, 1983 in Orange, Texas to Selene Perry and Shawn O&#8217;Dell. Erik was a very hard worker, for the last year he has been maintaining... View Obituary & Service Information

The family of Erik Brandon Perry created this Life Tributes page to make it easy to share your memories.