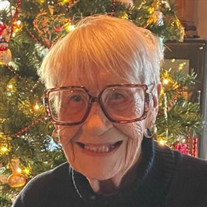 Fenella Fannin, 88, of Marfa, Texas passed away on Wednesday, March 23, 2022, at Harbor Hospice in Beaumont, Texas. Fenella was born on March 18, 1934, in Edinburgh, Scotland to Catherine Ferrell Bell and John Barton Bell. In 1954, Fenella emigrated with two of her sisters, Dorothy and Agnes, into the United States (U.S.). In 1965, Fenella became a proud U.S. citizen. Fenella married Lovell Fannin on September 15, 1956, in Sandy Hook, Kentucky and lived there until 1968 when she moved to Austin, Texas, and lived there until 2000. She was a homemaker and was an Au pair for one year. She then moved to Marfa, Texas in 2000 where she lived until her passing. While not a native Texan, she was proud to call herself a Texan. Fenella enjoyed knitting and sewing; she loved going to the movies when her mother took her to the theatre when she was a young girl. She liked going to the beach in Portabello, Scotland, eating a special lunch; she and her family often had picnics at the beach which were very special to her. Fenella often told her family stories of the sirens going off during World War II when the Germans were bombing her town and they had to take cover as to not get injured or worse. She loved Westerns and her favorite actor was John Wayne. She loved Willie Nelson and bagpipes. Also, she loved all of the pets in her life, but in particular she loved Royal Standard Poodle -Archie. Fenella knew how precious and fragile life was and appreciated every moment that she had and she especially appreciated her family and friends. She loved them dearly!! While Fenella said she graduated from the school of hard work, she focused her efforts to ensure her sons had the best education possible. Survivors include her children, David Barton Fannin of Marfa, Texas and Darren Scott Fannin of Austin, Texas; grandchildren, Travis D. Fannin and Laura Isabel Fannin both of Austin, Texas. Catherine and David Mannalack, niece and nephew both in Australia; Harold Farley, nephew in Scotland; nieces Gina and Kimberly Short of Sandy Hook, Kentucky; Grace Plunkett, niece of Lexington, KY. Fenella was preceded in death by her parents, her husband, Lovell Fannin and her siblings ; Mary, Maggie, David, Catherine also known as “Tootsie,” Charlotte, Dorothy, Elizabeth, Agnes, Goldie and Sofie. Private grave side services were held Friday, March 25, 2022, at Oak Bluff Memorial Park in Port Neches, Texas under the direction of Melancon Funeral Home in Nederland. In lieu of flowers, a donation to Grand Companions of Ft. Davis, Texas or any other charitable organization would have pleased Fenella.

The family of Fenella Fannin created this Life Tributes page to make it easy to share your memories.

Fenella Fannin, 88, of Marfa, Texas passed away on Wednesday,...