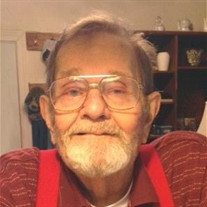 George Oliver Elkins, 84, of Port Neches, Texas passed away on December 25, 2017, at the Medical Center of Southeast Texas. George was born in Pine Bluff, Arkansas on February 3, 1933, to Lee Oliver and Lois Lucille Elkins, the oldest of their seven children. He was a United States Army veteran, serving during the Korean Conflict where he “fought the battle of Lake Michigan”. While in Illinois he met the love of his life, Audrey. They married on June 23, 1956, and moved back to Texas where he was working at the Texas Company, retiring from Star Enterprise in 1994. In his younger years he was a volunteer fireman for the city of Port Neches and while fighting a fire got his name in the paper for being a hero and “saving the family pet”. George had a wonderful sense of humor and loved to make people laugh. You could always count on him to have a joke or funny story to tell. He loved his family with all his heart, but his three grandchildren were his pride and joy, and they all could hold their own with him in the joking department which delighted him to no end. A stroke several years ago slowed him down physically as did numerous other health issues, but he never lost that sense of humor or that twinkle in his eye when he made you laugh. George is preceded in death by his mama and daddy; brothers, William “Billy” Elkins and Michael Elkins; nephews, Beau Elkins and Cody Elkins. He is survived by his loving wife of 61 years, Audrey; daughters, Molly DeRoche and husband, Steven of Nederland, Melissa Sheppard and husband, Bobby of Vidor; granddaughters, Emily Huval and husband, Beau of Austin, Rachel Duncan and husband, Jason of Austin; grandson, Ethan Sheppard of Clear Lake; sister, Jeannene Landry and husband, Riley of Port Neches; brothers, Dan Elkins and wife, Geneva of Olive Branch, Mississippi, Pat Elkins and wife, Margaret of Port Neches, Eddie Elkins and wife, Jackie of Nederland, and many nieces and nephews. There will be a gathering of family and friends on Friday, December 29, 2017, from 9-10 a.m. with the service to follow at 10 a.m. at Melancon’s Funeral Home in Nederland. The Rev. Dan Elkins will officiate.

George Oliver Elkins, 84, of Port Neches, Texas passed away on December 25, 2017, at the Medical Center of Southeast Texas. George was born in Pine Bluff, Arkansas on February 3, 1933, to Lee Oliver and Lois Lucille Elkins, the oldest of... View Obituary & Service Information

The family of George Elkins created this Life Tributes page to make it easy to share your memories.

George Oliver Elkins, 84, of Port Neches, Texas passed away on...