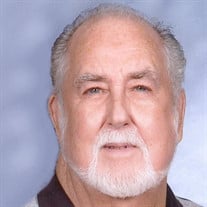 Gerald M. Reeves, Sr., affectionately known by many as “Shorty” 87, of Nederland, Texas passed away Friday, March 18, 2022, surrounded by his loving family. Shorty was born in Jacksonville, Texas on May 8, 1934, to the late Cornelius Walker Reeves and Charlcie Barron Reeves. Shorty was a parishioner of St. Elizabeth Catholic Church in Port Neches. He proudly served his country in the United States Marine Corps and retired from DuPont after sixteen years of service. Shorty was a simple man who enjoyed spending time with his family. He enjoyed watching both the Dallas Cowboys and Western shows. He also enjoyed spending time at the beach and visiting the Casinos with friends. Shorty will be greatly missed by his family and friends. Shorty is preceded in death by his parents; wife, Lillie Jo Roccaforte Reeves; son, Gerald M. Reeves, Jr.; brothers, Robert Reeves and Eugene Travis Reeves; and sister, Garvis Reeves Bilton. Those left behind to cherish Shorty’s memory are his daughter, Judy Morrison and her husband, Jerry of Lumberton, TX; grandchildren, Heather Reeves-Placette and her husband, Richard; Dr. Justin Morrison and his wife, Britney; Jeremy Reeves and his wife, Paige; Jana Zant and her husband, Casey; great grandchildren, Paisley Reeves, Hunter Reeves, Hunter Morrison, Tucker Morrison, Tyler Morrison, Cooper Zant and Carter Zant; sister, Ginger Reeves Walker McBee and her son, Gary Walker; and a host of nieces and nephews. The Reeves family would like to give special thanks to Tony and Nancy Resendez for being such sweet angels. Nancy was like a daughter, and both were always there for our family. Tony and Nancy will always have a special place in our hearts and in heaven. A gathering of family and friends will be held from 12:00 p.m. until 2:00 p.m., with a funeral service to begin at 2:00 p.m., at Melancon’s Funeral Home. Interment will follow at Oak Bluff Memorial Park in Port Neches. Serving as pallbearers, Jeremy Reeves, Hunter Reeves, Justin Morrison, Hunter Morrison, Tucker Morrison, Tyler Morrison, Casey Zant, Cooper Zant, Carter Zant and Richard Placette.

The family of Gerald M. "Shorty" Reeves, Sr. created this Life Tributes page to make it easy to share your memories.

Gerald M. Reeves, Sr., affectionately known by many as “Shorty”...