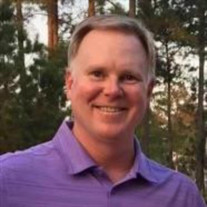 Gregory Eugene Gooch, 59, of Bridge City, Texas passed away at his home on Thursday, May 5, 2022. Greg was born on June 26, 1962 in Port Arthur, Texas to the late Donald Vincent Gooch and Mary Evelyn Gooch. After graduating from Bridge City High School, Greg attended Lamar University where he earned a bachelor’s degree in business. He went on to have a successful career as a sales executive, spending most of his 30-year career at Rosemount/Emerson where he sold sophisticated automation systems to manufacturing and refining facilities. While Greg worked hard to know his products better than the competition, he especially enjoyed building relationships with his clients over time and became good friends with many of them. Greg was very outgoing and enjoyed being around his close friends and clients. His passions were playing golf, the guitar and fishing. One of Greg’s fondest memories was taking his dad to play golf at Pebble Beach. He loved fishing on the Texas Gulf Coast and on Lake Sam Rayburn, and it was Greg’s dream to retire and live there so he could fish any time he wanted. Greg loved to play the guitar with his friends and cousin Brandon, and would provide great entertainment by making up his own lyrics to songs. Greg loved his family. He was a dedicated caretaker to his mother during her last few years of life when she needed him most, and was joined in doing so by his close friend, Teri Porter, who was always a great support to Greg. Greg’s favorite pastime may have been cheering on his brother, and eventually his nieces and nephew, in their athletic endeavors. When his brother Scott was growing up, Greg loved watching him play football at the University of Texas and he continued cheering on the Longhorns even after his brother graduated. The support that Greg gave Scott carried on to Josie, Ceci and Vince. Greg never missed a play watching live streams of their games and texting commentary back and forth to Scott who was on the sidelines, and the family finds great solace that in the last few months Greg traveled to Dallas to spend a weekend watching Vince play baseball, Houston to watch Ceci play volleyball, and Ann Arbor, Michigan to watch Josie play lacrosse. He was truly their biggest fan. Greg found the good in everyone and always made those in his circle feel special, as if they were best friends. He was quick-witted, knew how to put a smile on your face and genuinely loved making people laugh. Greg was a loving son, brother, uncle and friend, and he will be missed by all who knew him. Those left to cherish Greg’s memory are his brother, Scott Gooch, his wife Cecily and their children Josie, Ceci and Vince of Dallas; brother, Joel Gooch of Bridge City; and numerous loving friends and family members, including Teri Porter and many aunts, uncles and cousins in Texas and Louisiana. Greg had a special place in his heart for special needs children and supported the Shorkey Center in Beaumont, including by playing in their charity golf tournament for many years. For those desiring to make a memorial donation, please consider doing so at www.shorkey.org. A gathering of family and friends to honor the life of Gregory Eugene Gooch will be held at Melancon's Funeral Home in Nederland, Texas from 1:30 p.m. until 2:30 p.m. on Tuesday, May 17, 2022. The Funeral Service will immediately follow the visitation and will begin at 2:30 p.m.

Gregory Eugene Gooch, 59, of Bridge City, Texas passed away at his home on Thursday, May 5, 2022. Greg was born on June 26, 1962 in Port Arthur, Texas to the late Donald Vincent Gooch and Mary Evelyn Gooch. After graduating from Bridge City... View Obituary & Service Information

The family of Gregory Eugene Gooch created this Life Tributes page to make it easy to share your memories.

Gregory Eugene Gooch, 59, of Bridge City, Texas passed away at...