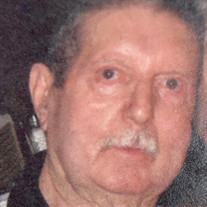 Jackson H. “Jackie/Goggle Eye” Smith, 86, of Nederland, Texas passed away on Saturday. October 19, 2019. He was born to Mary Julia Smith and Albert Jackson Smith on April 24, 1933 in Campti, Louisiana. Jackie served in the Navy during the Korean conflict. He worked for Texaco/Star Enterprise for 41 years, retiring in 1995. He was a past commander of American Legion Post 493 and past president of Fraternal Order of Eagles Lodge 3743. Survivors include his wife of 63 years, Janet (Guidry) Smith; sisters, Julia Vercher and her husband, Bernell of Metarie La., Virginia Looney and her husband, Homer of Montgomery, La., Susie Fredieu and her husband, Robert of Montgomery, La; sons, Charles Smith and his wife, Lisa of Nederland, Brian Smith of Nederland; and daughter, Christi Murphy and her husband, Robby of Nederland; grandsons, Jeremy Smith and his wife, Tiffany, Jason Smith and his wife, Courtney, Joshua Murphy and his wife, Meagan, all of Nederland and Jacob Smith and Fiancé, Josh Aymond of Eunice, La.; and granddaughters, Meagan Murphy and Briana Courmier and her husband, Dylan of Nederland; great grandchildren, Veston and Silas Smith, Daylan, Delayna and Destynee Courmier, and Emma and Addie Murphy, along with numerous nieces and nephews. He was preceded in death by his parents, Jack and Julia Smith and brother Charles Smith. A gathering of friends and family will be held on Monday, October 21, 2019 at Melancon’s Funeral Home in Nederland from 5:00 p.m. until 8:00 p.m. The funeral service will be held at 10:00 a.m. on Tuesday, October 22, 2019 also at Melancon’s Funeral Home with Rev. Kevin Kissel, Officiant. Interment will follow at Memory Gardens Cemetery in Nederland.

The family of Jackson H. "Jackie / Goggle Eye" Smith created this Life Tributes page to make it easy to share your memories.