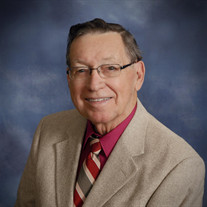 James Alfred “Jim” Breaux, 86, of Port Neches, passed away on Friday, April 12, 2019. Jim was the youngest of five children born to the late Alfred Breaux and Emma Clark Breaux on December 6, 1932 in Port Arthur, TX. He resided in the Port Arthur and Port Neches area most of his life. Jim was a graduate of Bishop Byrne High School in Port Arthur, class of 1951. He became an altar boy at an early age serving in many military funerals during WWII and was even an altar boy at his 50th class reunion Mass. While still in high school he joined the Knights of Columbus, Santa Maria Council in Port Arthur. Jim proudly served his country in the U.S. Army during the Korean Conflict. He was a member of St. Elizabeth Catholic Church in Port Neches. Jim was a business owner and entrepreneur. He and his wife, Lyn,owned JAB Enterprises in Port Neches where it was named Small Business of the Year by the Port Neches Chamber of Commerce. Laterthey opened The Industrial Engraver located in Port Neches. Jim was president of the Port Neches Chamber of Commerce, member of Groves, Nederland, Port Neches joint chamber of commerce council, member of Port Neches Sertoma, member of Veteran of Foreign Wars in Port Neches, and member of St. Mary High School alumni in Port Arthur. He was named Boss of the Year by the American Business Women’s Association. Jim was a volunteer cook at the Port Arthur Hospitality Center. He was a driving force in the formation of the Bishop Byrne High School alumni association and served as vice-president from its formation in 2003 until 2014. Even though he was in a wheelchair at the BBHS reunion in 2017 he still managed to get on the dance floor with his niece, Sherry Rouly Broughton, where he had the time of his life. Jim was a great dancer and was always the life of the party. Jim also worked as a funeral assistant at Heritage and Melancon Funeral Homes. Survivors include his wife of 42 years, Lyn Guillory Breaux, daughters Donna Washburn and husband John, Linda Ward and husband Alan, Karen Neumann and husband Chuck, Charlotte Hendley, son Steven Breaux, all of the Houston area, stepdaughter Melinda Tomasello and husband Jude of Orlando, FL, brother-in-law Ray Guillory and wife Darlene. Jim is also survived by grandchildren Joseph Breaux, Danny Byer, Nicholas Breaux, Holly Hendley, Luke Hendley, R. J. Isbell, Courtney Isbell, Meghan Isbell, Diane Neumann, Sam Neumann, Zoe Ward, Michael Tomasello and Jaclyn Tomasello; four great grandchildren, many nieces and nephews and friends. He is preceded in death by his parents; brothers Harold Breaux and Robert Breaux, sisters Velma Rouly and Hilda Myers.Jim willed his body to Baylor College of Medicine, The Willed Body Program, for teaching and medical research purposes, hoping that it would one day help others. He is unselfish even after death. A memorial Mass will be celebrated on Friday, April 26, 2019, at 11:00 am at St. Elizabeth Catholic Church in Port Neches with Father Shane Baxter and Father Kevin Badeaux officiating. Visitation will be 10:00 am until 11:00 am prior to the Mass. We never told each other goodbye; we always said “goodnight” because goodbye is a word we never wanted to say to each other. Jim always said “every day is a good day only some days are better than others”. Details and online guest registry available at Melancons.org.

The family of James Alfred "Jim" Breaux created this Life Tributes page to make it easy to share your memories.