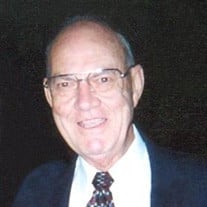 James Hilton Simon, 82, of Port Neches, died Sunday, August 14, 2016 at Oak Grove Nursing Home in Groves. James was born November 20, 1933 in Lafayette, Louisiana to the late Henry Simon and Editha Trahan Simon. He retired from Market Basket as the meat director with 27 years of service. He also worked for L & A grocery in Port Neches for 17 years. James was a 1952 graduate of Thomas Jefferson High School, and a member of St. Elizabeth Catholic Community in Port Neches. He was also a member of the Port Neches Knights of Columbus #2461. A Mass of Christian Burial will be 2:00 p.m. Wednesday, August 17, 2016 at St. Elizabeth Catholic Church in Port Neches with Father Shane Baxter officiating, with interment to follow at Oak Bluff Memorial Park in Port Neches under the direction of Melancon’s Funeral Home in Nederland. A gathering of the family and friends will be from 5:00 p.m. to 8:00 p.m. Tuesday, August 16, 2016 with a Knights of Columbus Rosary to be held at 6:00 p.m. at the funeral home. James is survived by his wife of 64 years, Mary Louise Leblanc Simon of Port Neches; his daughters, Jamie Simon Schexnaider of Port Neches, and Carleen Simon of The Woodlands; four grandchildren, Kevin Schexnaider and his wife Cortnie of Port Neches, Kristen Schexnaider of Port Neches, Callie Keeney and her husband Austin of Oklahoma City, Oklahoma, and Bradley Gresham and his wife Mireya of Murrieta, California; his great grandchildren, Trent, Kade, Kinley, Cadynce, Sophia, Casen, Olivia, and Cole. James was preceded in death by his parents, also his daughter, Danette Simon Gresham, his sisters, Doris Domingue, and Lillian Guidry, and nephew, Lee Guidry. Online guest registry available at www.melancons.org

The family of James Hilton Simon created this Life Tributes page to make it easy to share your memories.