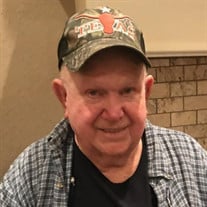 James Edward Smith, 84, of Nederland passed away on Tuesday, February 15, 2022, in Nederland, Texas. James was born on January 20, 1938, in Port Arthur, Texas to Myrtle Raper Smith and Tom Smith. He was a 1956 graduate of Port Neches High School and was a retired Master Sergeant in the United States Air Force where he served his Country for twenty-two years. After retiring from the Air Force James went on to work for the Big Three Refinery in the maintenance department for several years. He attended church at Church on the Rock in Beaumont for many years. James loved to collect guns and coins; loved hunting and the outdoors; traveling with his wife of fifty-four years, Debbie, and the rest of his family. He also loved to watch Westerns on TV and the History channel. He loved anything that had to do with airplanes and history and was a very proud American. James always carried around his cell phone usually the “flip phone” and carry it in his t-shirt pocket. He had flashlights all around the house along with his “grabbers” when he got older and his knees where not as reliable as they once were. James loved his wife, children and grandchildren and his two great grandchildren dearly; often tearing up talking about them or seeing their pictures. He was a very caring man; honest, loving and will be missed by all who knew and loved him. Survivors include his wife, Deborah Gail Landry Smith of Nederland; children, Joey Smith and his wife Teresa of Selma, Alabama, Sheila Vincent and her husband Brian of Nederland and Christopher “Chris” Smith and his wife Jessica of Warren, Texas; grandchildren, Nikki Smith, Shelbi Esparza and husband Cristian, Reilly Elmer and husband Jordan, Adam Smith, Jeremy Smith and Jenna Smith; great grandchildren, Alex Elmer and Houston Esparza. James was preceded in death by his parents; sister, Betty Jean Juneau and his brother, Raymond Earl Smith. A visitation will take place from 10:00 a.m. until 11:00 a.m. Saturday, February 19, 2022, at Melancon Funeral Home in Nederland. A Chapel Service to Honor the Life of James Edward Smith will be conducted at 11:00 a.m. Saturday at the funeral home with burial to follow at Memory Gardens Cemetery in Nederland. Serving as Pallbearers will be Adam Smith, Jeremy Smith, Cristian Esparza, Cody Smith, John Ballard and Jordan Elmer. Honorary Pallbearers will be Phillip Williams and Larry Hansing.

James Edward Smith, 84, of Nederland passed away on Tuesday, February 15, 2022, in Nederland, Texas. James was born on January 20, 1938, in Port Arthur, Texas to Myrtle Raper Smith and Tom Smith. He was a 1956 graduate of Port Neches High... View Obituary & Service Information

The family of James Edward Smith created this Life Tributes page to make it easy to share your memories.

James Edward Smith, 84, of Nederland passed away on Tuesday,...