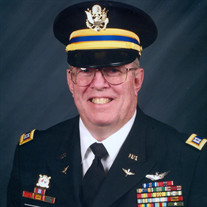 Cpt Jerry D Kelley US Army Retired of Nederland, Tx. passed away on August 28, 2021 at the age of 78 surrounded by his children. He was born on July 18, 1943 to Alvie Dalton and Elvie Ruth Fleniken Kelley, both deceased, in Nacogdoches, Texas. His younger brother Gene Edwin Kelley preceded him in death. At the age of 6 months his family moved to Port Arthur Tx. His dad was employed in the construction industry in the area and eventually moved to Groves, Tx. where he graduated from Port Neches Groves High School, class of 1962. After a tour of duty in Vietnam and 14 years of service in the US Army, he was released from active duty in August 1975 from the Army Reduction Force because the Government thought they had to career Soldiers in its ranks. He then moved his family to Nederland, TX. Cpt Kelley served in the Army and National Guard for 29 yrs. and 4 months and was a decorated Officer, Helicopter Pilot and Vietnam Veteran. He was employed by Gulf Oil Refinery and later Chevron Chemicals, retiring after 28 yrs of service. Cpt Kelley was active in the scouting program, serving as Cub Master of Pack 232 and Scout Master of Troop 422, assisting over 30 young men reach the Rank of Eagle Scout. He is preceded in death by his wife Sharon of 54 years and survived by sons Alan Kelley and his wife Trisha and David Kelley both of Nederland, TX. Two Grandsons, Justin Kelley of Vidor, TX. And John Redumis of Nederland, TX. Granddaughter Katelyn Shuler, Husband Michael Shuler and great granddaughter Elizabeth Shuler of Leesville LA. and sister-in-law Brenda Kelley of Port Neches, TX. A gathering of friends and family will take place on Friday, September 3, 2021 from 6:00p.m. to 8:00 p.m. at Melancon’s Funeral Home in Nederland. Funeral Services will take place on Saturday, September 4, 2021 at 11:00 a.m. at Melancon’s Funeral Home in Nederland. Military honors will be conducted by SETX Veterans group, which he was a member of for over 25 years.

Cpt Jerry D Kelley US Army Retired of Nederland, Tx. passed away on August 28, 2021 at the age of 78 surrounded by his children. He was born on July 18, 1943 to Alvie Dalton and Elvie Ruth Fleniken Kelley, both deceased, in Nacogdoches, Texas.... View Obituary & Service Information

The family of Cpt. Jerry D. Kelley created this Life Tributes page to make it easy to share your memories.