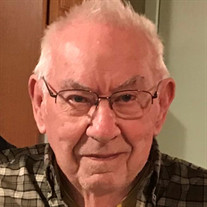 Joseph Anthony “Joe” Durkin, age 87, Groves, TX, passed away peacefully on Thursday, April 5, 2018, at Memorial Hermann Hospital in Houston, TX, after a brief illness. The fourth of five children of Anthony Joseph Durkin and Anna Farley Durkin, Joe was born on September 7, 1930, in Wilkes-Barre, PA, and grew up in nearby Sugar Notch. In 1952, he received a Bachelor of Science degree in Chemistry from King’s College in Wilkes-Barre, and then moved to Buffalo, NY, where he worked for Semet Solve and Linde chemical companies while pursuing his Masters of Science in Chemistry at Canisius College. There, he met the love of his life, Ann Veronica. They were married on June 17, 1961, in Buffalo at St. Margaret’s Church. Thereafter, they relocated to South Bend, IN, for Joe to pursue his Ph.D. in Chemistry at the University of Notre Dame, which he completed in 1964. He began working as a Research Chemist for Texaco in Beacon, NY, becoming a pioneer in zeolite catalysis and receiving ten patents for his work in this field. The family moved to Groves, TX, in 1976, where Joe continued to work for Texaco until his retirement in 1993 as a Senior Scientist. He was most proud of his family, both immediate and extended, including his beautiful and loving wife, Ann; three children - Anthony and his spouse Amanda (Irvine, CA); Molly and her spouse, Patrick (Buena Vista, CO); and Maureen, and her two children, Anthony and Nora (Denver, CO), along with 14 nieces and nephews. He is also survived by his dear sister, Anne Marie “Nancy” Durkin, age 93, of Wilkes-Barre, PA, and was predeceased by his beloved brothers, John and Gerard, and his beloved sister, Jeanne. Joe was insatiably curious about the world and had numerous interests. As a young man, he was an avid downhill skier; he loved weekend ski trips to Stowe and Mad River Glen, VT. He was a tinkerer, finding ways to repair anything in or around the house that was broken, building various home furnishings, engaging in woodworking, and fabricating home electronics. He was committed to learning and education at the highest of levels, ensuring that all three of his children pursued and completed their college educations. He became a Master Gardener through the Texas A&M Extension Service and grew award-winning vegetables. In fact, he found great peace working in his yard and garden, referring to it as his therapy. Joe was a dedicated servant to others throughout his life, most recently volunteering his time weekly at The Hospitality Center in Port Arthur for more than a decade. He also found joy in music - as a clarinet and piano player, as an active member of church choir and barbershop quartet, and as a lover of Broadway music. And he was proud of his Irish ancestry and took every opportunity to share that with others, including for a number of years hosting an annual St. Patrick’s Day Party. When his grandchildren, Anthony and Nora, were born, Joe felt he had been given the gift of a lifetime. He loved them very much and was so proud of who they are becoming. A gathering of family and friends will be held at Melancon’s Funeral Home in Nederland, TX, on Thursday, April 12, 2018, from 5:00 p.m. – 8:00 p.m. A Mass of Christian Burial will be celebrated by Monsignor Kenneth Greig at 10:00 a.m. on Friday, April 13, 2018, at Immaculate Conception – St Peter the Apostle Catholic Church in Groves. Burial will be at St. John’s Cemetery in Tidioute, PA, at a yet to be determined time. In lieu of flowers, memorials may be made in Joe’s name to St. Jude Children’s Research Hospital - https://www.stjude.org/, to King’s College - https://www.kings.edu/giving-to-kings, or to The Hospitality Center - http://www.catholiccharitiesbmt.org/pages/programs/hospitality.html.

The family of Joseph Anthony "Joe" Durkin created this Life Tributes page to make it easy to share your memories.