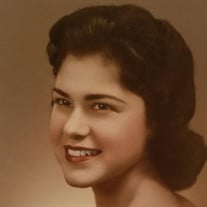 Joycelyn (Lyn) Guillory Breaux was born January 17, 1941 in Port Arthur, Texas to Clarence (Lefty) and Lillian Sarver Guillory and passed away on November 16th, 2021. She was a Bishop Byrne High School graduate and was the last remaining founder of the Bishop Byrne Alumni Association where she served as the first president. She was a BBHS Colleen and in 1959 served as Secretary in the Colleens. Lyn was also a Port Arthur College Graduate and was employed by B.F. Goodrich in Port Neches starting out as a secretary and later became a buyer. She remained with the company for 41 years throughout all the corporate transitions and retired from Ameripol Synpol. Lyn moved from Port Arthur to Port Neches in the early 1960’s and has been a dynamic member in her community ever since. For over 50 years she has been a member of the American Business Women’s Association where she served as president and was elected ABWA’s Woman of the Year numerous times. She ran the Miss Port Neches pageants for over 20 years. She was an active Port Neches Chamber of Commerce member alongside her husband, Jim Breaux, who was a former Port Neches Chamber of Commerce President, owner of JAB Enterprises, and a fellow Bishop Byrne Alumni Association founder. Over the years, Lyn had a vital role with the Pow Wow Festival, which is now called the Riverfront Festival. In addition, she helped with planning the original Tugboat Island at Port Neches Park. Lyn was also a member of St Elizabeth’s Catholic Church in Port Neches, to which she has a strong connection. Her great Uncle Henry Christ was the owner of the Liberty Theater in Port Neches where St. Elizabeth’s masses were originally held. He, along with his brother Xavier, sold several of parcels of their land to St. Elizabeth’s to build the church that was originally located on Ave B in Port Neches. Lyn has dedicated her life to contributing to her community and takes great pride in both Port Arthur and Port Neches, areas that she holds dear. Her bubbly and fun personality was obvious to all who knew her. She was always so full of life and had a beautiful smile that would light up a room. She was young at heart, fun, and her greatest joy was spending time with family and friends, especially making memories with her grandchildren. She will be greatly missed. Lyn is survived by her daughter, Melinda Camerera Tomasello and her husband Jude Tomasello and two grandchildren - Michael and Jaclyn Tomasello, five step children, numerous step grandchildren, her brother Raymond Guillory and his wife Darlene Guillory. She was preceded in death by her husband James (Jim) Breaux. Services will include a Celebration of Life on Thursday, December 2nd from 6pm to 8pm at Melancon’s Funeral Home in Nederland. Attendees are asked to wear something red in honor of Lyn’s favorite color. A mass will be held the following day, Friday, December 3rd at 10am at St Elizabeth’s Catholic Church in Port Neches.

Joycelyn (Lyn) Guillory Breaux was born January 17, 1941 in Port Arthur, Texas to Clarence (Lefty) and Lillian Sarver Guillory and passed away on November 16th, 2021. She was a Bishop Byrne High School graduate and was the last remaining founder... View Obituary & Service Information

The family of Joycelyn "Lyn" Breaux created this Life Tributes page to make it easy to share your memories.