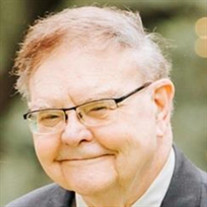 Kenneth (born September 26, 1935) went home to be with his Lord, Jesus Christ, on May 23, 2020. “To be absent from the body is to be present with the Lord.”—2 Corinthians 5:8. He was an active member of the First Baptist Church in Port Neches, Texas. When he was 10 years old, he accepted Jesus Christ as his Savior and Lord and was baptized at First Baptist Church Baytown. Waiting for him in heaven are his mother, Leora S. Dorris, and father, Hayes H. Dorris, Sr. He was born in the home his father built in Baytown, Texas. He is survived by his wife, Barbara, and children, James, Christopher, and Jeanette, whom he loved very much. He is also survived by 2 expectant granddaughters. After graduating from Robert E. Lee High School in 1954, he served in the U. S. Army medical core for three years. In 1957, he enrolled in Lee College and graduated after two years while working full time at U. S. Industrial Chemical in Deer Park as a laboratory technician. He earned a B.S. in Chemistry in 1961 and a Ph.D. in 1965 in Physical Chemistry from The University of Texas at Austin and joined the chemistry department faculty at Lamar University Beaumont. He retired from Lamar in 2017 after 51 years as a Distinguished Professor Emeritus. He was a research fellow at the U. S. Atomic Energy Commission’s Savannah River facility in 1966 and was a visiting professor in Malaysia, 1986 -1987. He served as the Director of Chemistry Laboratories at Malaysia’s Institute of Technology. He has acted as a consultant and as an expert witness in chemical related matters. He is listed in the International Who’s Who in Education, in the International Biographical Centre, Cambridge, England, in America’s Registry of Outstanding Professionals, Westbury, NY, in The American Men of Science, and in The Lord’s Book of Life. He has directed numerous graduate and undergraduate projects. His research resulted in the publication of a number of articles in several peer reviewed journals. Many of these articles have been requested by scientists worldwide. One of his publications was included among the top 25 scientific articles in the world by Science Direct in 2006. He also served as a reviewer for several chemistry journals and textbooks. He was an avid scuba diver and loved to travel. He visited many countries including China, England, India, Europe, the Middle East, and Russia. But his favorite destination was Jerusalem. He was baptized in the Jordon River in March 2006 while visiting Israel. Visitation will be at 9:30am at First Baptist Church, Port Neches, followed by funeral at 10:00 am. He will be laid to rest beside his mother and father at Forest Park Lawndale Cemetery (lot 208, section 24) in Houston, Texas. In lieu of flowers, donations can be made to Annie Armstrong World Wide Missions.

The family of Dr. Kenneth Leowen Dorris created this Life Tributes page to make it easy to share your memories.