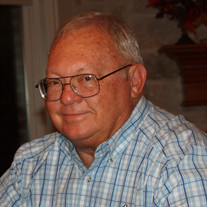 Larry Roy Elliott, 75, of Nederland, Texas passed away December 26, 2019, surrounded by family. He was born November 30, 1944 in Corpus Christie, Texas to the late Roy Hazen Elliott and Mittie Lucile Brown Elliott. After serving in the United States Army, Larry received a degree in finance, but his career took him down many different paths. While working in banking, he learned that he was not the type of person to sit behind a desk. He eventually went on to pursue a career in law enforcement, but he really found his calling when he opened Scootersmith II on Nederland Avenue. It allowed him to combine his love of scooters with the fellowship of his other retired friends, as they all congregated at the shop for their daily coffee and conversation. Larry was an avid sailor. He enjoyed buying and selling boats just as much as he did sailing them – from the smallest catamaran to his 36’ Morgan, he loved being on the water with his wife, Betty and their friends. Larry’s love of wheeling and dealing continued with cars, motorcycles and scooters, often to Betty’s chagrin. He was always eager to tackle a new project but became much less excited about finishing them. Anyone who knew Larry would speak about his generosity – whether it was helping a friend who was down on his luck or giving of his time at church. He was a member of the Stephens Ministry team at Trinity United Methodist Church. He later became active at Wesley UMC Nederland, where he served as Treasurer for the United Methodist Men and was also a member of the lawn maintenance team. Larry was preceded in death by his parents and brother, Wayne Elliott. He is survived by his loving wife of 30 years, Betty Elliott; children Amy Toon (Jeff); Alicia Peterson (Matthew); Ryan Elliott (Jayne); stepdaughter Sharon Sibley; sister Susan Mullins (Paul); brother Robert Elliott; and sister-in-law Brenda Elliott. He also leaves behind grandchildren Hannah, Joshua, Elizabeth, Sarah and Abigail Toon; Morgan and Micah Peterson; and Walter and Molly Elliott. Visitation will be held at 10:00am on Saturday, January 4th at Wesley United Methodist Church, 3515 Helena Avenue, Nederland, followed by a Memorial Service at 11:00am. Memorial donations may be made to Wesley United Methodist Church.

Larry Roy Elliott, 75, of Nederland, Texas passed away December 26, 2019, surrounded by family. He was born November 30, 1944 in Corpus Christie, Texas to the late Roy Hazen Elliott and Mittie Lucile Brown Elliott. After serving in the United... View Obituary & Service Information

The family of Larry Roy Elliott created this Life Tributes page to make it easy to share your memories.