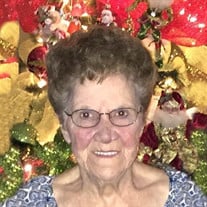 Lily Roccaforte Hauck, 91, of Port Neches, passed away on Tuesday, April 25, 2017 with her family by her side. Lily was born, September 2, 1925 in Port Arthur, to the late Antonio Roccaforte and Nicolina Graffagnino Roccaforte both of Italy, and lived most of her life in Port Arthur before moving to Port Neches in 2011. Lily graduated from Thomas Jefferson High School in 1943. She was married May 2, 1944 in Port Arthur, to James Joseph Hauck. She was the former owner of Chef’s Grocery in the 1600 Block of Gulfway Drive. After the death of her husband the family business was sold and she went to work for Roy Theriot at Roy’s Food Center on Stadium Road in Port Arthur. She worked at that location for 30 years. She was a member of St. Joseph Catholic Church in Port Arthur where she was a member of the Altar Society. Lily is survived by her sons, James Hauck and his wife, Gail and Wayne Hauck all of Port Neches; grandchildren, Kim Hammond and husband, Trace, Jim Hauck and wife, Gennis, Kristie Briggs and husband, James; great grandchildren, Parker Hammond, Madeline Hammond, Jim Hauck, Blair Briggs, Joseph Hauck, Blake Briggs and a host of nieces and nephews. Lily was preceded in death by her husband, James Joseph Hauck; her siblings, Rosa Roccaforte, Frank Roccaforte, Anthony Roccaforte, Sebastian Roccaforte, Joseph Roccaforte, Paul Roccaforte, Camille Roccaforte, Francesca Roccaforte, Katie Roccaforte, Steve Roccaforte, Frances Roccaforte Bartlett, Dorothy Roccaforte Nicotre and Salvador Roccaforte. There will be a gathering of family and friends on Wednesday, April 26, 2017 from 5:00 p.m. to 8:00 p.m. with a rosary to be prayed at 6:30 p.m. at the funeral home. A Mass of Christian Burial will be held on Thursday, April 27, 2017 at 3:00 p.m. at St. Joseph Catholic Church in Port Arthur with the interment to follow at Calvary Cemetery in Port Arthur, under the direction of Melancon’s Funeral Home in Nederland. Serving as Pallbearers, Parker Hammond, Jim Hauck, Joseph Hauck, Blake Briggs, Joseph Nicotre and Ronald Roccaforte; Honorary Pallbearers, Leonard Roccaforte, Monroe Pratt, Frankie Roccaforte, Tony Roccaforte, Bob Granger, Jim Granger and John Wayne Bartlett. The family would like to give a special thank you to our nurse, Sharla, and Gentiva Hospice for all of the love and support they have shown to us. Memorial contributions can be made to the Hospitality Center, 3959 Gulfway Drive, Port Arthur, TX 77642 in c/o St. Elizabeth Catholic Church in Port Neches, TX.

Lily Roccaforte Hauck, 91, of Port Neches, passed away on Tuesday, April 25, 2017 with her family by her side. Lily was born, September 2, 1925 in Port Arthur, to the late Antonio Roccaforte and Nicolina Graffagnino Roccaforte both of Italy,... View Obituary & Service Information

The family of Lily Roccaforte Hauck created this Life Tributes page to make it easy to share your memories.

Lily Roccaforte Hauck, 91, of Port Neches, passed away on Tuesday,...