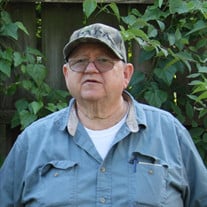 Lonnie Dean Delahoussaye, Sr., 73, of Lumberton, Texas passed away April 11, 2021 at his home. Lonnie was born in Port Arthur, Texas on May 7, 1947 to the late Octa Pierre “O.P.” Delahoussaye and Eula Mae Romero Delahoussaye. Lonnie was a long-time resident of both Port Arthur and Nederland. He was a graduate of Thomas Jefferson High School class of 1966. Lonnie was a member of the old Our Lady of Guadalupe church in Port Arthur, Texas. He was a hard worker, and a man of many traits. Lonnie was part owner of Delahoussaye and son Gulf/Chevron gas station until 1977, and also spent several years working for ATM machine shop. For a large portion of Lonnie’s career, he worked for Air Liquide, until he retired in 1998, as an operator with more than 27 years of service. Lonnie was a die-hard Houston Astros fan. He had a great love for old American muscle cars, and enjoyed racing his 1966 marina blue Chevy II Super Sport. Lonnie was known for being a big jokester, and knew how to make people laugh. He was a kind person that never met a stranger. Lonnie will truly be missed. Those left to cherish Lonnie’s memory are his son, Lonnie Delahoussaye, Jr. and his wife, Katrina of Liberty; daughter, Carrie McDonald of Lumberton; Grandchildren, Madyson (Maddy) McDonald, Evelyn Delahoussaye, Kale Delahousssaye; and “his big fur baby”, the family dog, Bella. Lonnie is preceded in death by his parents; and sister, Carolyn Delahoussaye Romero. A gathering of friends and family will be held at Melancon's Funeral Home on Friday, April 23, 2021 from 1:00 p.m. until 2:00 p.m. with the memorial service to begin at 2:00 p.m. with Father John Hughes, officiant.

The family of Lonnie Dean Delahoussaye, Sr. created this Life Tributes page to make it easy to share your memories.