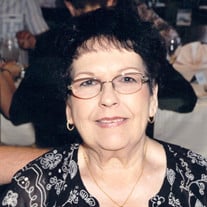 Margaret Trahan Fowler entered the world on April 29, 1947 in Abbeville, Louisiana. She was the third child born to Eldridge Trahan and Kirby Connor Trahan. Margaret was always joyful, happy, and smiling. She left a lasting impression everywhere she went. After the family moved to Texas, they quickly called Port Neches “home”. There, she met the love of her life, Bobby Wayne Fowler. They married on January 23, 1965 when she was still in high school. She had a wonderful life with many great memories. She enjoyed traveling to the lake to spend time with friends and family. She was a fantastic cook and started a family tradition of cooking a big pot of gumbo every Christmas Eve. She loved to sit on the porch with Bobby and drink her coffee while watching the hummingbirds come and go. On Friday, September 20, 2019, Margaret closed her eyes on Earth and opened them as an angel in Heaven. Margaret was a loving and devoted wife, mother, grandmother, and friend. She was loved by so many and will be missed more than words could ever describe. Those left to cherish Margaret’s memory are her husband of 54 years, Bobby Fowler of Port Neches; her mother, Kirby Trahan of Vidor; her daughter, Tammy Fowler Coward and her husband, Jeff, of Port Neches; her daughter, Loretta Fowler Dumesnil and her husband, Ken, of Port Neches; her son, Kevin Fowler of Port Neches; her grandchildren, Lyndsey Dumesnil Weaver, Morgan Fowler, and Lauren Dumesnil Smith; her sister, Mary Anne Winegeart; her brother, Leeward Trahan; and her very best friend, Dee Howard. She is preceded by her father, Eldrige Trahan and her sister, Elsie Dore. A gathering of family and friends will be held at Melancon’s Funeral Home in Nederland on Tuesday, September 24, 2019 from 9:00 a.m. to 11:00 a.m. with a funeral service at 11:00 a.m. Interment will follow at Oak Bluff Memorial Park in Port Neches.

The family of Margaret Trahan Fowler created this Life Tributes page to make it easy to share your memories.