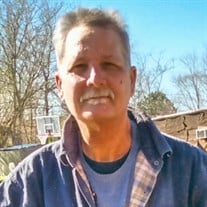 Marty Lynn Eagleson, 56, of Port Acres passed away Saturday, August 21, 2021, at Harbor Hospice of Beaumont. Marty was born October 15, 1964, in Groves, Texas to the late Donald and Georgia Eagleson. Marty was a member of Port Acres United Pentecostal Church. He retired as a sand blaster and painter after many years of service. Marty was a good-hearted man; he was kind, gentle and easy going. He had a funny sense of humor and was a character who made many people laugh. Marty is preceded in death by his parents, Donald Ray Eagleson and Georgia Ann Guidry Eagleson; and his brother, Donald Anthony Eagleson. Those left behind to cherish his memory are his loving wife of 15 years, Jolene Eagleson of Port Acres, TX; children, Christopher Robert Degeyter and his wife, Lisa; Jacob Michael Degeyter; grandchildren, Kenyon Degeyter, Kylei Degeyter and Bentley Degeyter; brother, Dale Eagleson and his wife, Regina; and several nieces and nephews. A gathering of friends and family will be held from 11:00 a.m. until 1:00 p.m., followed by the funeral service to begin at 1:00 p.m., Wednesday, August 25, 2021, at Melancon’s Funeral Home in Nederland. Interment will follow at Greenlawn Memorial Park in Groves.

The family of Marty Lynn Eagleson created this Life Tributes page to make it easy to share your memories.