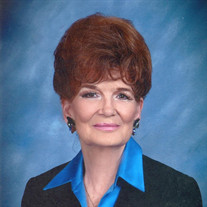 Mary “Dean” Bowen’s sunrise came on September 28, 1932. The Lord was as merciful and faithful to her in her transition as He was to her in this life. She entered into His presence with the ease of a whisper as the sun set on her life on May 20, 2017. Dean was born to Waysie and Gladys Hebert Judice in Port Arthur, Texas, where she spent her childhood and formed special bonds that she treasured throughout the span of her life. She graduated from Thomas Jefferson High School on June 1, 1950. On July 18, 1953, she married Miles W. Bowen. As the wife of a career Army Officer, she enjoyed the adventures of traveling and meeting new people from across the world. Despite the many hellos and goodbyes, she mastered the art of creating friendships and maintaining ties. Those were the precious years. After Miles's death in April of 1969, she returned home to Texas with their 4 children. She earned a bachelor's degree from Lamar Tech and was employed by Gulf/Chevron for 17 years before retiring in 1992. She was a member of St. Charles Catholic Church and was also a member of the St. Charles Women's Guild. She devoted much of her time to her family and friends. She loved volunteering at her church and staying active in the community. Dean was never happier than when she was telling a joke or when she was surrounded by family and friends at home. Her signature smile was warm, compassionate, and reassuring, while her ability to acknowledge and keep up with every special occasion was legendary to all who knew her. Her thoughtfulness and generosity were incomparable. Dean is survived by her son, Steve Bowen and wife, Brenda; daughters, Diane Bowen and Jill Bowen; sisters, Dot Robbins, Hazel Jensen, Carliss Beard and husband, Chuck, Judy Siguaw and husband, Kevin Ferguson; grandchildren, Robert Simmons and wife, Rachel, Derrick Bertrand, Brandy Pinney and husband, Matt, Miles and Garrett Bowen, Amy Bivind and many great-grandchildren. She leaves behind beloved and cherished cousins, nieces, nephews and friends. She was preceded in death by her parents; loving husband, LtC Miles W. Bowen; son, Jeffrey Bowen and brother, Jimmy Judice. Dean did not want a funeral. A memorial to honor her life will be announced at a later time.

Mary &#8220;Dean&#8221; Bowen&#8217;s sunrise came on September 28, 1932. The Lord was as merciful and faithful to her in her transition as He was to her in this life. She entered into His presence with the ease of a whisper as the sun... View Obituary & Service Information

The family of Mary "Dean" Bowen created this Life Tributes page to make it easy to share your memories.