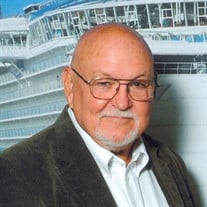 Michael F. Guidry passed away at his home on Thursday, October 1, 2020 in Nederland, Texas. He was born in Port Arthur, Texas on October 14, 1943 to Albert F. Guidry and Jackie (Andrus) Atkinson Guidry. Michael graduated from Port Neches-Groves High School in 1962. He graduated from Lamar State College of Technology in May of 1967 with a Bachelor of Arts Degree in Psychology as well as a Master of Education Degree in Guidance and Counseling from Lamar University in August of 1976. He continued on with his education and earned a certification in School Administration. Mr. Guidry was raised in 4th Avenue Baptist Church but upon returning from the Navy, he and his wife, Wynnelle, joined First United Methodist Church of Nederland. They were members there for 42 years where he sang as a faithful member of the Chancel Choir. Michael and Wynnelle moved their membership to First United Methodist Church of Beaumont 4 years ago where they are currently singers in the Chancel Choir. Mr. Guidry loved the outdoors and loved anything that had to do with water. He was an author of fiction with his recently published book “Out of the Deep”. He served 45 years as a member of the MCT Credit Union Board of Directors, many times as it’s chairman. He served the Nederland Independent School District for 24 years as an Assistant Principal and Principal of Nederland High School before becoming Assistant Superintendent for Curriculum and Instruction. He also served as a secondary classroom teacher, District Educational Diagnostician and Special Education Supervisor for 6 years with Port Neches-Groves Independent School District. In past years, he was also a member of the following Boards: Mid and South Jefferson County Crime Stoppers, Nederland Chamber of Commerce, Nederland United Way, Mid-County YMCA, and South County Breakfast Lions Club. Mr. Guidry proudly served his country in the United States Navy as an Aviation Electronics Technician from 1968-1972. He was stationed at Miramar “Top Gun” Naval Air Station in San Diego, California with his last tour of duty at the Kingsville Naval Air Station in Kingsville, Texas. While there, he also attended Texas A&M University with studies in personnel management and economics. Michael was responsible for maintenance of airborne communication, navigating and electronic counter measure devices. He also held a secret security clearance with crypto endorsement. While serving on the U.S.S. Handcock, he participated in three combat deployments to Vietnam while serving with Navy Fighter Squadron 24. Mr. Guidry is preceded in death by his parents Jackie and Albert Guidry, his sister Grace Guidry Thacker and son-in-law David Johnson. Mr. Guidry is survived by his wife of 53 years, Wynnelle Guidry of Nederland, Texas. His daughter Meredith Johnson of Beaumont, Texas and grandchildren, Laci Johnson and Jaxon Johnson; his daughter and son-in-law, Kymberly and Ben Fromme of Overland Park, Kansas and grandchildren and step-grandchildren, Addison Reeves, Fletcher Reeves, Braiden Fromme, Brianna Fromme and Brooks Fromme; his brother and sister-in-law David and Donna Guidry; nephew and niece, Troy Guidry and Alicia Guidry and grandnieces, Taylor Guidry and Paisley Guidry; his brother-in-law, Dwight Thacker. In lieu of flowers, friends so desiring may make a memorial contribution to First United Methodist Beaumont Chancel Choir Fund, P.O. Box 3247, Beaumont, Texas 77704-3247; Beaumont Interfaith Choral Society, P.O. Box 10936, Beaumont, Texas 77710; or the Disabled American Veterans Charitable Service Trust, P.O. Box 14301, Cincinnati, OH 45250. A gathering of family and friends will be held from 5:00 p.m. until 7:00 p.m., Monday, October 5, 2020, at First United Methodist Church of Beaumont; 701 Calder Avenue, Beaumont, Texas. Services for Mr. Guidry will be held at 2:00 p.m., Tuesday, October 6, 2020, at First United Methodist Church of Beaumont. Interment will follow at Forest Lawn Memorial Park, with Military Honors provided by the Southeast Texas Veteran’s Service Group.

The family of Michael F. Guidry created this Life Tributes page to make it easy to share your memories.

Michael F. Guidry passed away at his home on Thursday, October...