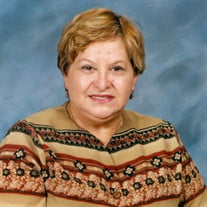 Norma Alicia Guerra, 77, of Groves, Texas passed away on Wednesday, January 12, 2022 at the Medical Center of Southeast Texas. She was born in Nueva Rosita, Coahuila on September 15, 1944 to the late Alonso Salinas Martinez and Dora Elia Flores Campos. Norma was a long-time active member of Our Lady of Guadalupe Church in Port Arthur, Texas. She was very involved in the church and was a Guadalupana, a member of the Alter Society, the Seniors Club, the Spanish Choir, the Spanish Prayer Group, and most importantly she was a Eucharistic Minister. Norma took great pride and was proud of being able to distribute communion to the members of her church and the home bound. In Norma’s spare time, she enjoyed cooking and gardening. She was best known for her tamales, and if you visited her home, you were not leaving hungry. Norma was a loving wife, mother, grandmother and friend. She will be missed be all that knew her. Those left behind to cherish Norma’s memory are her sons, Rudy Guerra and his wife, Gina, Ricky Guerra and his wife, Jennifer; her grandchildren, Kaylyn Guerra, Ashley Guerra, Emily Guerra, Amelia Guerra, Noah Guerra; her brother, Roberto Salinas Flores; and her sister, Gloria Salinas Flores. Norma is preceded in death by her husband, Rudy Guerra, Sr.; her granddaughter, Avery Anne Guerra; her parents; and her brother, Rogelio Salinas Flores. A gathering of family and friends in honor of Norma’s life will be held from 7:30 p.m. until 9:00 p.m. on Sunday, January 16, 2022 at Melancon’s Funeral Home in Nederland, Texas with a Rosary being recited at 7:30 p.m. A Mass of Christian Burial will be held on Monday, January 17, 2022 at Our Lady of Guadalupe Catholic Church in Port Arthur, Texas and will begin at 11:30 a.m. Father Urbano Saenz celebrant. Burial will follow at Memory Gardens of Jefferson County Cemetery in Nederland, Texas.

Norma Alicia Guerra, 77, of Groves, Texas passed away on Wednesday, January 12, 2022 at the Medical Center of Southeast Texas. She was born in Nueva Rosita, Coahuila on September 15, 1944 to the late Alonso Salinas Martinez and Dora Elia Flores... View Obituary & Service Information

The family of Norma Alicia Guerra created this Life Tributes page to make it easy to share your memories.

Norma Alicia Guerra, 77, of Groves, Texas passed away on Wednesday,...