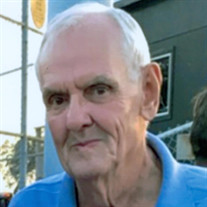 Paul McFarland, 77, passed away peacefully on October 12, 2020. He was born and raised in Port Arthur, Texas to Thurber and June McFarland on February 25, 1943. He attended DeQueen Elementary, Tyrrell Elementary, Woodrow Wilson Junior High, and Thomas Jefferson High School. He resided in Nederland, Texas for the last 50 years. In 1962, he met the love of his life, Sylvia McFarland, whom he was married to for 57 years, until her passing earlier this year. Paul was the co-owner, alongside his wife, of Mac's Drive-In Grocery for 8 years. Also, he was an independent distributor for Borden's and Flowers Baking Company from the age of 16 until his passing. He was a loving father, grandfather, and great-grandfather. Family was everything to him, he never missed a game, recital, or event. He is preceded in death by his parents Thurber and June McFarland, as well as his wife Sylvia McFarland. Those left to cherish Paul's Memory are his siblings Ronnie McFarland, Judy Alvarez, Gwen McFarland, Tonya Mitchell, Merrie Gay Taylor, and Cheryl Mendez. He is also survived by his children Michael McFarland, Timothy McFarland, Melissa and Todd Domingue, and Kristi McFarland. Also, he had 7 grandchildren, Brandon McFarland, Aaron McFarland, Logan Domingue, Colton Weisbrod, Elise Perkins, Shane Domingue, Hope Perkins, and 6 great-grandchildren. The pallbearers are those as named, Brandon McFarland, Aaron McFarland, Casey McFarland, Logan Domingue, Shane Domingue, and Robert Holt. A gathering of family and friends will be held at Melancon's Funeral Home in Nederland on Saturday evening, October 17, 2020 from 5:00 p.m. ~ 8:00 p.m. Mr. McFarland's funeral service will also be held at Melancon's Funeral Home in Nederland on Sunday afternoon, October 18, 2020 at 2:30 p.m. Interment will follow at Memory Gardens of Jefferson County in Nederland.

The family of Paul McFarland created this Life Tributes page to make it easy to share your memories.