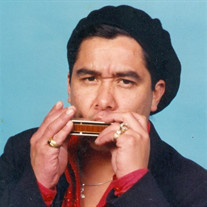 Paul Orta, a native of Port Arthur and a global blues legend, passed away on May 16, 2019. He was well known internationally for his skills with a harmonica. Paul spent his life following his passion of music all around the world. His accomplishments include at least three dozen compilations in four continents, numerous endorsements and even the invention of a special “slide harp.” Paul is preceded in death by his parents, David and Maria Orta and his oldest sister, Virginia Herrera. He is survived by his brothers and sisters, James Orta of Nederland, Rudy Orta of Nederland, Johnny Orta of Port Arthur, David Orta of Port Arthur, Velma Wappler of Groves and Vicky McDaniel of Port Arthur. A Celebration of Paul’s Life will be held from 4:00 p.m. to 8:00 p.m. with a Rosary being recited at 6:00 p.m. on Monday, May 20, 2019 at Melancon’s Funeral Home in Nederland. Recently our brother Paul Orta was diagnosed with stage 3 colon cancer. He is not in the best health so surgery is not a possibility right now. In the coming weeks we will be working with his doctors on next steps, including chemotherapy. We know the road ahead will be hard for him and that he will need financial support to get through the medical journey that awaits. For those who do not know Paul, he is a blues legend who has fronted the band The Kingpins (a.k.a. The International Playboys) and various other groups around the world. He has opened for B.B. King, John Lee Hooker, Stevie Ray Vaughn, Van Morrison, The Fabulous Thunderbirds, Junior Walker, James Cotton, Buckwheat Zydeco, Dennis Quaid band with Huey Lewis, to name a few. Paul was born in Port Arthur, Texas (hometown of Janis Joplin) and was first influenced by Louis Armstrong when he was 7. At 9 years, he joined the school band, playing the coronet. Stifled by the school’s choice of music, he quit as the band never played blues or jazz. Thats when he found his true calling - the harmonica. Three months after quitting the school band, at the age of 16, he had his own professional band (The Bayou Boogie Band), which was playing in the honkytonks and juke joints of Southeast Texas and Southwest Louisiana. In 1979 Paul moved to Austin, Texas and quickly made a splash on the Austin music scene. He won the Kerrville Folk Festival in 1980. He formed The Backdoor Men with fellow Port Arthur native Bill Jones (guitar). They were joined by bassist Eddie Stout and The Kingpins were born. Always wanting to learn from the best, he entered the “Antones the University of the Blues” where he played with blues greats as Jimmy Rogers, Snooky Pryor, Eddie Taylor, Sunnyland Slim, Hubert Sumlin, Luther Tucker, Ted Harvey, Matt “Guitar” Murphy, Pinetop Perkins, Wayne Benett, Willie “Big Eyes” Smith, Henry Grey and Robert Lockwood Jr., among others. He was nominated to be a “Texas Harmonica Tornado” by Buddy Magazine in 1987. He played at the Battle of the Harmonicas in San Francisco and the Texas Harmonica Rumble in Austin, Texas. Hohner Harmonicas endorsed him in 1990 . He helped Kendrick Amplifiers design a amplifier called the “Texas Crude.” Paul also is endorsed by The Harp Depot, Shaker Mic’s, The Amp Room, Tony Ramos Harps, Jimmy Gorden Harmonicas, Mauro Pionzio Harmonicas. In fact, Paul is one of the few harmonica players endorsed with both Hohner U.S.A., and Hohner Europe. He also designed his own special “slide harp” which allows one to play various postions on one harmonica His passion later in life has been bringing music to kids, especially those from underprivileged and disadvantaged backgrounds who might never get exposed to jazz and blues. He helped form back in his hometown town a. “Blues in the Schools” to help achieve this goal. He has released over a dozen albums and has appeared in at least 3 dozen different compilations in North & South America, Europe, Japan, Africa and Australia. Paul is also a songwriter whose songs have been covered by different groups around the world. In addition he has performed with second generation bluesmen like Kim Wilson, Derek O’Brian, Tommy Shannon and many others. Paul has also toured and recorded with "Texas Guitar Tornado" U.P. Wilson (U.S.A. and Europe). Past members of Paul’s band have included Uncle John Turner (Johhny Winter), Keith Ferguson (The Fabulous Thunderbirds), Mike Kindred (Stevie Vaughn), Wesley Starr (Delbert McClinton), Jimmy Carl Black (Frank Zappa) and Freddie Waldon (Anson Funderburg and the Rockets). He worked as a producer for Ervin Charles “Greyhound Blues”, Wild Bill Pitre “I was raised on a farm” and “Shuffle with Lester” (with Lazy Lester).

Paul Orta, a native of Port Arthur and a global blues legend, passed away on May 16, 2019. He was well known internationally for his skills with a harmonica. Paul spent his life following his passion of music all around the world. His accomplishments... View Obituary & Service Information

The family of Paul Orta created this Life Tributes page to make it easy to share your memories.

Paul Orta, a native of Port Arthur and a global blues legend,...