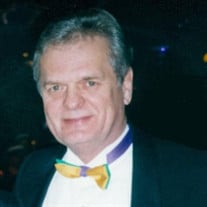 Paul Anthony Wojcik, 75, of Port Neches, TX passed away peacefully in his home, August 23, 2017, surrounded by family and friends. He was born May 3, 1942 in Spangler, Pennsylvania and graduated from Father Lopez High School in Daytona Beach, Florida As a teenager Paul and his brother, Richard, worked in their parent’s jewelry store in Ebensburg, PA. He also worked in his uncle's Car Dealership, hence the beginning of his love for cars. He moved to Nederland in 1960 and graduated from Lamar College in Beaumont, TX with a degree in Finance and Marketing. While attending college, he worked at Gordon's Jewelers in Beaumont. After graduation, he went to work for the Texaco Refinery. In 1978, he established Nederland Jewelers and enjoyed many years working with his parents in the business. In 1990, he married the love of his life, Gladys Mitchell. Both being business people, they began expanding the business in 1999 by opening a new store on Hwy 365, in Nederland, in 2003 they opened their Beaumont, TX location. Later in 2006, they established a store in Lake Charles, LA. He is a member of St. Charles Catholic Church. Paul was an avid car collector, attending all of the best car shows in the nation. He made many good friends who shared his passion of cars. He never met a car he didn't need! He was preceded in death by his parents, Tony and Theresa Wojcik and his father-in-law Calvin C. Mitchell. He is survived by his beloved wife, Gladys Mitchell Wojcik of Port Neches; his brother, Richard Wojcik, wife Margaret of Memphis, TN, his mother-in-law Florence Mitchell of Lake Charles, LA., his brother-in-law Steve Mitchell, wife Cathy, of Lake Charles, LA., his nephews Chris Wojcik and David Wojcik, wife Elizabeth, of Memphis, TN. Niece Christy Mitchell, nephew Ryan Mitchell, wife Brittany, and niece Lori Murphy, husband Jason all of Lake Charles, LA. A gathering of family and friends will be held on Friday, August 25, 2017 from 5:00 p.m. until 8:00 p.m. at Melancon’s Funeral Home in Nederland. The funeral service will begin at 10:00 a.m. on Saturday, August 26, 2017, also at the funeral home with Dr. Joe Worley and Mr. James Moore, officiating.

Paul Anthony Wojcik, 75, of Port Neches, TX passed away peacefully in his home, August 23, 2017, surrounded by family and friends. He was born May 3, 1942 in Spangler, Pennsylvania and graduated from Father Lopez High School in Daytona Beach,... View Obituary & Service Information

The family of Paul Wojcik created this Life Tributes page to make it easy to share your memories.