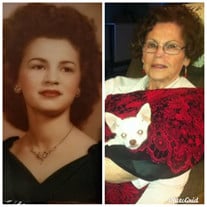 Peggy A. Mannino 85 of Groves, TX/Gulf Breeze, FL left this world to be with our Heavenly Father on Sunday, December 22, 2019. Peggy was born in Shreveport, Louisiana on October 15, 1934 to parents Marshall and Hurteline Robertson. She was raised in Port Arthur, Texas. Peggy married and had 6 children with Richard C. Parrish Sr. After Twenty four years of marriage she divorced and a few years later married the love of her life, Benjamin (Benny) John Mannino. Peggy was the office manager for DeWitt's Air Conditioning and Sumrall's Air Conditioning where she retired at age 72. Peggy was a member of First Baptist Church of Groves, Texas until she moved to Florida to live with her daughter in 2012, then moved her membership to Olive Baptist Church in Pensacola, Florida. Peggy loved the Lord, her husband, family and friends with all her heart and she will forever be remembered in our hearts. Peggy is survived by her children son Richard Parrish Jr, and wife Lynn of Groves, TX, Daughter Karen Parrish Stevens and husband Billy of Crystal Beach TX, and Daughter Malinda Parrish of Gulf Breeze, FL. Step son Greg Mannino of San Antonio, TX, and daughter in laws Phyllis and Chandra Parrish of Groves, TX. She is also the grandmother of 10, great grandmother of 23, and great great grandmother of 3 with one on the way. Peggy is preceded in death by her parents Marshall and Hurteline Robertson, her husband Benjamin (Benny) Mannino, her sons Michael Parrish, Timothy Parrish, Robb Parrish, her brother Wilson Robertson and Sister Mary Jo Fertitta. One of Peggy's favorite Bible quotes from Jesus was John 14:22 - In my Father's house are many mansions: if it were not so, I would have told you. I go to prepare a place for you. May Peggy rest peacefully now in the House of the Lord. Celebration of Life services will be Saturday January 11, 2020 from 2 to 4pm at Melancon’s Funeral Home 1605 Ave H Nederland, TX 77627 (409) 722-0218

Peggy A. Mannino 85 of Groves, TX/Gulf Breeze, FL left this world to be with our Heavenly Father on Sunday, December 22, 2019. Peggy was born in Shreveport, Louisiana on October 15, 1934 to parents Marshall and Hurteline Robertson. She was... View Obituary & Service Information

The family of Peggy A. Mannino created this Life Tributes page to make it easy to share your memories.