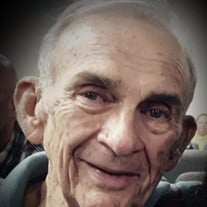 Ralph E. Viles, 82, of, Port Neches, Texas passed away Wednesday, April 29, 2020 at his residence. Ralph was born November 2, 1937 in Hardin, Texas to the late Silas and Maynon Viles. Ralph was a member of St. Elizabeth Catholic Church, Knights of Columbus Council #2461, Wingfoot Club Board, Goodyear Retiree Board and was the president of Moss Hill Hunting Club. He retired from Goodyear after 37 years of service as a mechanic and shift foreman. After his retirement Ralph enjoyed traveling with his wife, Brenda and attending live music shows. He was an avid hunter and fisherman; he loved to play guitar and sing. Ralph was a friend to everyone and was always willing to help others. He was a family oriented man who was a loving spouse, father and grandfather. Ralph was fun-loving with a witty personality. Ralph was preceded in death by his parents, Silas Eugene Viles and Maynon Rachel Conway Viles. Those left to cherish his memory are his loving wife of 47 years, Brenda England Viles; children, Venita Wehrly (Doug), Vickie Brown (Jessie), Vonda Rasheta (Nick), Valynda Wilson (Bennie) and Kerri Hurlbut (Jason); sister, Barbara Radeleff (Ernest); 7 grandchildren; 8 great grandchildren; honorary son, Brent England (Tarynn), and sister-in-law, Cheryl England. The family would like to extend a special thank you to: granddaughter, Laila; Felicia Jacobs, Terry and Terrell Ross, and Cathy with Harbor Hospice for the love and care they provided to Ralph. In honor of Ralph, donations can be made to the Ralph Viles Endowed Scholarship at Lee College in Baytown. This scholarship is being established to support a student each year in perpetuity in their effort to earn a degree in the petrochemical industry. Donations can be made to Lee College Foundation, P.O. Box 808, Baytown, TX 77522 and mention the Ralph Viles Scholarship or at www.lee.edu/foundation/donate/named-scholarships/.

The family of Ralph E. Viles created this Life Tributes page to make it easy to share your memories.