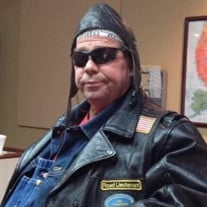 Robert “Spud” Brown, 63, of Groves, Texas passed away on June 16, 2021. He was born in Port Arthur, Texas on March 12, 1958 to the late Billy R. Brown and Etta Marie Johnson Brown. Those left to cherish Robert’s memory are his wife, Lee Ann Stensrude Brown of Groves; his children, Rachael Ann Carey and her husband Daniel of Orange, Christopher Lee Brown and his wife Diana of Lumberton, and Aaron Glenn Brown and his wife Ryan of Nederland; his step-children, Andrew Stephen Kleven of Qualicum Beach, BC Canada, and Erin Michelle Kleven of Qualicum Beach, BC Canada; his grandchildren, Michael Carey, Ethan Carey, Cameron Kleven, Joshua Helton, Patricia Helton, and Renee Tatroe; his special companion, Hanna; his brother Billy Brown and his wife Shirley of Beaumont; and his sister, Sasha Holt of Birmingham, Alabama. He is preceded in death by his parents; his brother Willie Brown; and his sister Charla Warren. A Celebration of Life will be held at the American Legion Post #7 in Port Arthur on Saturday, June 26, 2021 at 12:00 p.m.

The family of Robert "Spud" Brown created this Life Tributes page to make it easy to share your memories.