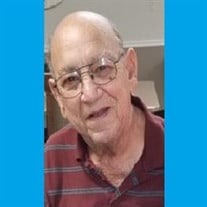 Russell “Russ” Eugene Balsamo Sr., 87, of Port Neches, passed away Monday, February 17, 2020. Russ was born October 3, 1932 in Port Arthur to the late Stanley Balsamo and Mary Mannino Balsamo. Russ lived all of his life in the Port Arthur/Port Neches/Crystal Beach area. He retired after 46 years with Star Enterprise as a supervisor in the Crude Department and was a member of St. Elizabeth Catholic Church in Port Neches. Russ is survived by his two daughters, Christine Martin and her husband Danny of Beaumont, and Roxanne Ferguson and her husband Kenneth of Port Neches; his six sons, Russell “Rusty” Balsamo Jr. and his wife Linda of The Woodlands, Richard “Ricky” Balsamo and his wife Diane of Port Arthur, Randy Balsamo and his wife Becky of Fannett, Robert Balsamo and his wife Sherry of Pearland, Rodney Balsamo and his wife Leslie of Port Neches, and Ronald “Ronnie” Balsamo and his wife Tina of Groves, his step-children, Naomi Arabie Nelson and her husband John, Angie Peltier and her husband Chris, Johnny Arabie, and David Arabie. He is also survived by his grandchildren, Ronda, Shane, Jason, Jeremy, Randi, Robert, Emma, Blake, Ashton, Derek, Chase, Karli, Kyle, Kelli, Amanda, Christopher, Angie, and Kim. Also, seventeen great grandchildren, and two great-great grandchildren. Russ is preceded in death by his parents; the mother of his children, Mary Ann Balsamo; and wife Marvel Balsamo. A gathering of the family and friends will be Friday, February 21, 2020 from 5:00 p.m. to 8:00 p.m. at St. Elizabeth Catholic Church in Port Neches with a rosary to be prayed at 6:00 p.m. A Mass of Christian Burial will be held on Saturday, February 22, 2020 at St. Elizabeth Catholic Church in Port Neches at 11:00 a.m. followed by his committal service at Oak Bluff Memorial Park in Port Neches under the direction of Melancon’s Funeral in Nederland. The family would like to give a special thanks to his nurses at Oak Grove Nursing Home and Sharon Lee who cared for him in his final days. In lieu of flowers the family wishes memorial contributions be made to Catholic Charities Hospitality Center, or to Boys Haven of America Inc. Beaumont, Texas.

The family of Russell "Russ" Eugene Balsamo Sr. created this Life Tributes page to make it easy to share your memories.