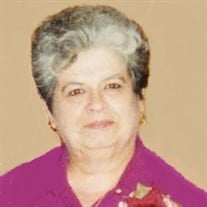 Stella Rivera Todora, age 82 of Port Arthur, Texas went to be with the love of her life of 52 years, Phillip, on Saturday, August 8, 2020. Stella was born on March 23, 1938 in Port Arthur, Texas to the late Jose and Maria Rivera. Stella married Phillip Todora, Sr. on Aug. 18, 1956, together they raised 4 beautiful children; Phillip Jr., Joni, Ray, and Elizabeth. Stella led a very eventful life from the time of being able to wash dishes, standing on the old wooden coca- cola bottle crates, in her mother’s bar/café to making sure that Dad and all the kids wanted for nothing. From her Mother’s bar at the Mexico Café to dancing with Dad at the Fraternal Order of Eagles Mom lived her life to the fullest. As Mom grew in age she LOVED playing cards and bingo. Many memories were made that we will be cherished forever. Even when she started slowing down with her illness, she could still deal a slick hand of cards. Our beloved mother’s wishes were to be cremated, and has requested no visitation. Mother will be placed at the foot of our father’s gravesite in a private family ceremony at a later date. The family would like to give thanks to the Home Health Care nurses and all of her doctors, for the love and care they gave to our mother. Without saying Mom you will truly be missed. Stella is preceded in death by her husband, Phillip Todora, Sr.; her parents, Jose Jesus Rivera, Sr. and Maria De Jesus Osorio; daughter, Joni Marie Todora, sister, Irene Diaz; brothers, Raymond Rivera, Jose Rivera, Alejandro Rivera; and grandson-in-laws, Ray Riojas Sr., and Zane Wooley. Those left to cherish her memory are sons, Phillip Todora, Jr. and his wife, Janice of Bridge City TX; Ray Todora and his wife, Haidee of Port Arthur TX; daughter, Elizabeth Hernandez of Port Arthur, TX; sisters, Anna Oropeza, Rita Rivera and Maria Guerra; brothers, Danny Rivera and Richard Rivera; grandchildren, Brandi Wooley, Candace, RaeAnna, Trey, Collin Todora, Sylvia Riojas and Veronica Esparza (Andres); great-grandchildren, Cesar Muzquiz, Joni and Joel Esparza, Freddy Artola, Sofia and Brandon Riojas, Bailey and Kathryn Wooley; and a host of nieces and nephews.

Stella Rivera Todora, age 82 of Port Arthur, Texas went to be with the love of her life of 52 years, Phillip, on Saturday, August 8, 2020. Stella was born on March 23, 1938 in Port Arthur, Texas to the late Jose and Maria Rivera. Stella married... View Obituary & Service Information

The family of Stella Rivera Todora created this Life Tributes page to make it easy to share your memories.