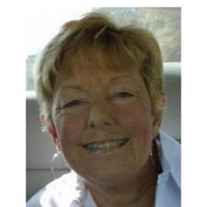 Susanna Lynn Broadway, 63, of Port Arthur, Texas passed away on Monday, April 5, 2021. Susanna was born on February 22, 1958 in Port Arthur, Texas to the late, Carol and Bobbie Hollier. Susanna was a parishioner of St. Charles Borromeo Catholic Church. She was a teacher with the Beaumont Independent School District with 18 years of service and teaching math was her life’s passion. Susanna was an amazing cook, she was very outgoing, a great friend and she never met a stranger. She was a strong fighter and fought hard against polycystic kidney disease for over 20 years. Those left to cherish Susanna’s memory include her daughter, Chelsea Broadway and her wife, Jamie of Houston, Texas; son, Mason Broadway of Nederland, Texas; her grandchildren, Ethan Broadway and Vance Broadway both of Casper, Wyoming, and numerous aunts, uncles, nieces, nephews and friends. Susanna is preceded in death by her husband, John S. Broadway; parents, Carol and Bobbie Hollier; and her son, John B. Broadway. Donations may be made in Susanna’s memory to the American Kidney Fund by visiting www.kidneyfund.org or by mailing your donation to: American Kidney Fund, 11921 Rockville Pike, Suite 300, Rockville, MD. 20852. Per the families wishes, there are no services scheduled at this time.

The family of Susanna Lynn Broadway created this Life Tributes page to make it easy to share your memories.